You are here: Home / Archives for Matt Milletto 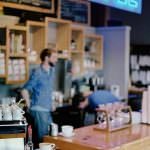 A newcomer on the Portland coffee scene, Water Avenue Coffee started as a pop-up shop named Temporary Coffee during the construction of their permanent space in 2009. They officially opened in 2010 in the up and coming Central Eastside Industrial District, on, you guessed it, SE Water Avenue, next to Clive Coffee in a … END_OF_DOCUMENT_TOKEN_TO_BE_REPLACED