You are here: Home / Archives for Chiang Mai Restaurant

In my surveys over the years, this question has received more votes than any other category. No so for 2015's Best Thai Restaurant in Portland. Perhaps Portlanders are getting more sophisticated, and experiencing other cuisines as more diverse restaurants open. I am glad interests seem to be evening out. In the 2011 … END_OF_DOCUMENT_TOKEN_TO_BE_REPLACED

In 2011, the order of best Thai was Pok Pok, Red Onion, Chiang Mai, Chaba Thai, Mee-Sen, Thai Noon and E-san. This year, Chiang Mai has climbed, Red Onion has plummeted, and Thai Noon has fallen off the list. I don't think it will surprise anyone that Pok Pok took 43% of the vote. Here are the results: Out of 840 … END_OF_DOCUMENT_TOKEN_TO_BE_REPLACED 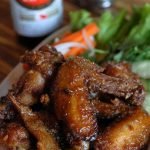 Best Coconut Waters Updated 9.23.19 - added Maui & Son's. Full change list at bottom. What are the best coconut waters? Judging by the amount of shelf space devoted to them in grocery stores, coconut water is a popular item. Not being a huge … END_OF_DOCUMENT_TOKEN_TO_BE_REPLACED