The reader survey results for "Best Steak in Portland" doesn't have any big surprises except for Ringside's second place performance. It shows what giving more attention and a new face to a restaurant can do:Out of 818 votes cast:1. Laurelhurst Market -21% of the vote. 3155 East Burnside St.,Portland, OR 97232   Map   (503) 206-30992. Ringside - 9%. My review … END_OF_DOCUMENT_TOKEN_TO_BE_REPLACED

The Washington Post food critic Tom Sietsema recently paid a visit to Portland and has nothing but raves about our food scene. On the face of it, Portland, Ore., shouldn't be one of the best places in the country to dine.Unlike New Orleans or San Francisco or Chicago, Portland doesn't claim any classic dishes. The ethnic presence in this city of nearly 600,000 people is … END_OF_DOCUMENT_TOKEN_TO_BE_REPLACED 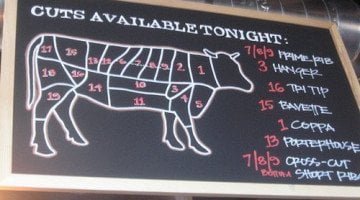 From the Washington Post on Portland and this website: Portland, Ore.: A town where you can eat and drink ... and walk it all offWhere to eat: You've got some tough choices to make, but here are some suggestions to get you started.-- According to a readers' survey at Portland Food and Drink.com ("Throwing ourselves on the grenade of bad food to save you"), two … END_OF_DOCUMENT_TOKEN_TO_BE_REPLACED

The three best new restaurant in Portland 2009 as voted by our readers are:Laurelhurst Market - double the votes of anyone else. 3155 E Burnside St., Portland. Beaker & Flask - it looks like the long wait for Kevin to open this restaurant was well worth the time. Our review. 727 SE Washington St., Portland Metrovino - part wine bar, part upscale … END_OF_DOCUMENT_TOKEN_TO_BE_REPLACED