You are here: Home / Archives for Park Kitchen Restaurant 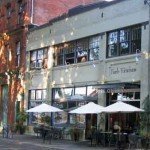 PFD Restaurant of the Year, 2006 Don't tell his wife, but Scott Dolich is having an affair with kumquats. Not some blond bimbo from the Pearl, but rather a tart little fruit from Southern California. I, for one, couldn't be more thrilled. When I was growing up, my parents had a little kumquat tree on the … END_OF_DOCUMENT_TOKEN_TO_BE_REPLACED

There are a few address in Portland, that are notorious for failed restaurants. Think the old Zefiro space. A reader asks, "Do you believe that a space's history (particularly if it has a so called 'hex' or has been home to many failed ventures) can be overcome by a talented chef and/or great food? Are Portlander's … END_OF_DOCUMENT_TOKEN_TO_BE_REPLACED