The Portland selection of bottle shops is growing every year! Here is a guide

Every city should have a few great bottle shops, especially if that city is known for beer. In my opinion, Portland needs more neighborhood bottle shops; there’s something special about buying beer from a place that specializes in beer and beer alone. Here is my guide to some of the best beer shops in Portland Oregon.

A good bottle shop is a place where anyone can go for simple advice—on food pairings, styles, glassware, cellaring, etc.—without feeling intimidated. It should have a good selection, which does not mean carrying the Congolese lager you had on safari ten years ago, but having some standards plus a range of bottles you can’t find at good grocery stores. Beer should be priced fairly; regular beer shoppers will spot ridiculous markups right away.

The responsibility for creating a place that feels accessible and specialized rests not just with the beer buyer, but the staff. Like a good sommelier, a beer seller can make recommendations by smartly gauging a customer’s knowledge. For example, if you know you like dark beers after Labor Day, a good purveyor will ask you just enough to figure out 1) what kind of beers you’ll definitely like and 2) what might push your palate a bit, within reason. Also, I appreciate bottle shop staffers who don’t talk down to me because I’m a woman, which unfortunately does happen on occasion.

Here are what I consider to be Portland’s true bottle shops. I chose not to include grocery stores with good beer selections, including New Seasons and Beaumont Market, or specialty shops which carry beer but on a small-scale. 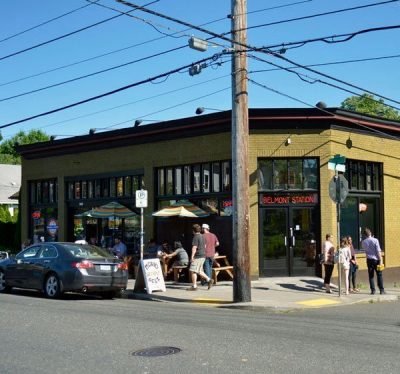 The oldest and most venerated bottle shop in Portland has an impressive selection of 1,400 beers (there’s a constantly updated list on their website) and knowledgeable staff that will take the time to browse and brainstorm if you ask. Chilled American beer is on one side and imports on the other, which includes some six-packs. Room-temp beers are shelved in between. The aisles are tight, but it’s impressive to see such a huge range of beers packed into a relatively small room. If you’re shopping for glassware, this is the place. In general, Belmont has a reputation for higher prices; consider it the downside. Grab a chilled bottle and drink it on site or try one of the cafe’s 34 rotating beers on tap, a rotation that usually features some rarer Oregon beers. A reader reports that there is “a great food cart, Monk’s Deli, making highly recommendable sandwiches, fries, salads and chips.

Belmont Station is well worth a visit and joins our list as one of the best beer shops in Portland.

The BeerMongers bottle shop and taphouse just celebrated their 5th anniversary.  that plans to become half bottle shop/half bar, along the lines of Belmont Station. The owners have emphasized low prices ever since their opening, and the prices do seem a bit lower than other places, especially John’s Market and Belmont Station. But I hope the strategy works in their favor. To whet appetites for future bar plans, they offer 10 rotating beers on tap for $2-5 a glass and have tables with stools, a couch and beer reference books for browsing. Good selection of over 600 different bottles chosen by owners Craig Goulla and Sean Campbell, who have a preference for west coast beers. The huge bottle selection is arranged by style to help customers find new brews to try. They are happy to fill growlers to go and special order almost any keg. A final bonus – The Beermongers show all Portland Timbers, Trailblazers and Oregon Duck games.


Located behind Fresh Pot, this Mississippi Avenue bottle shop is a one-man show. Owner Mike White camps at a counter facing his two coolers, which hold about 500 bottles of craft beers, mostly American six-packs (he refuses to carry anything from Budweiser or Coors, but does offer the requisite PBR) and 22-ouncers, and limited German and Belgian bottles. There’s a notable stock of canned craft beers. The store has a not-messing-around vibe, with minimal decor, a TV hanging from the ceiling and no seating or fussy displays. It’s refreshing, especially if you ask White for a recommendation. He’s friendly, knows beer, the neighborhood regulars, and is accustomed to making recommendations for non-beer geeks.

[FD] Imperial was named one of America’s 100 Best Beer Bars by DRAFT Magazine in both 2014 and 2015. Their selection includes over 20 local beers on tap and over 400 American Craft beer, at reasonable prices. Imperial has a nice selection of out of distribution stouts for cellaring. Bottles are shelved by style, which makes it easy to find new labels similar to what you are used to drinking. No food is available, but you can bring in take-out from many places in the area. From the business, “Drink at either of our beer-inspired bars or take beer home to enjoy. Either way, you can choose from a top notch selection of local beers on tap and hundreds of the best bottled American craft beer available.” You’ll find a frequently updated list of new bottles on their website.

The west side’s answer to a serious lack of bottle shops, this is one of the best beer shops in Portland. This hulking, chilly, non-local, non-organic grocery store in Multnomah Village carries over 5,000 import and craft beers in the back of the store, ten taps out front, hundreds of ciders and mead, not to mention over 2,000 wines. That’s a lot of beer—the sight is awe-inspiring. The customers usually seem excited to be there, and the deli area just completed a renovation/expansion which includes eight beers on tap and burgers, for carnivores and vegetarians. Walking down an aisle of imported beer from Japan, Norway and Denmark, stuff you won’t find anywhere else in Portland on such a large-scale, and end up at a case of Totino’s frozen pizzas. The staff can be excited to talk about beer once you convince them you can hold up your end of the conversation, and their recommendations shelf is worth perusing. Otherwise, the rows can be daunting. You’ll also find over 400 wines available with a range of prices.

Now they have expanded to the old Original Taco House location at 3550 SE Powell Blvd. It also has a huge selection of beer, wine, and Cider. The space also includes a beer garden.

[FD] This is my normal wine/beer stop. Don’t miss the walk-in cooler in the very back of the store – you probably won’t notice because they can’t possible have even more beer! $5 draft pours and a $10 6 flight sampler.

In 2018 the kitchen area was remodeled, adding a deli which allows them to have more food options and regular wine and beer tastings. See the website for details. Rumor has it they are looking to expand to the SE Powell area. 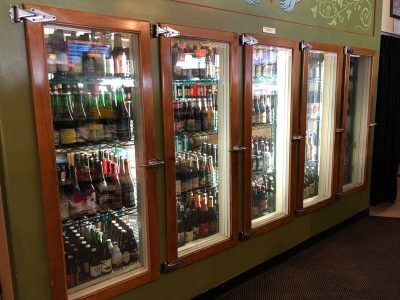 [FD] The most beer-focused of the McMenamins brewpub chain, the bottle shop carries over 800 beers, wine, cider and McMenamins spirits. Bottles can be taken out or consumed at their indoor/outdoor tables. 20 beer and ciders on tap as well as growler fills. Open to all ages (21 and over for booze).

The Portland Bottle Shop in Sellwood focuses on small production companies from around the world. They carry more than 400 wines and 300 beers as well as ciders, offer wine by the glass and have eight rotating taps. Recently they expanded their food menu to add many more choices to accompany your brew. Beer tastings are offered on random evenings from 5-7 pm at no charge – you’ll find a schedule here. A wine tasting is held every Friday night and typically includes 5 wines for $10 per person.

Saraveza is more bar than bottle shop, but the alluring vintage coolers and an extensive list of bottles make it a to-go North Portland shopping spot. The bar is cozy and is decorated with ironic Midwest kitsch, including bottle cap tables and vintage PBR signs. If you pass up what’s on tap, choose a bottle and drink it on site (also an excuse to munch on their tasty pickled vegetables). The Oregon and California dominated domestic list includes a nice geographical range, including some appropriate Wisconsin bottles. International imports are Belgian heavy, with some standard lambics and a few rarer bottles. The list offers something for everyone, but don’t plan on receiving too much advice from the staff—service can be slow and/or distracted. The printed bottle list closely resembles what’s in the cases, but do some window shopping; seasonal bottles frequently never make it to the menu. Over 250 bottles and 10 taps are available. If you are hungry, Saraveza has a selection of savory pies and tavern fare.

Lucy Burningham writes for a variety of publications. Her stories about beer have appeared in The New York Times, MIX magazine, Beer Northwest and Northwest Palate. Sections marked “[FD] have been written in recent updates by this site.

Previous Post: « What Was Your Favorite Dish of 2009?
Next Post: Rethink Your Burger – It could be made from pink meat goop! »