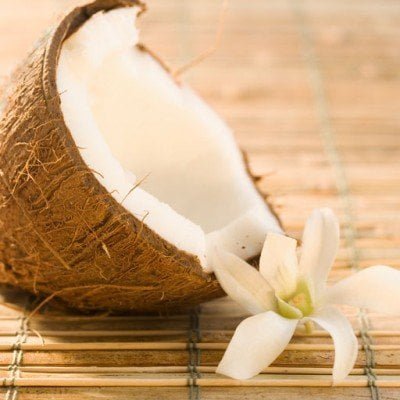 Updated 8/27/2020 – First impressions: CoCo Joy coconut water – only two tasters due to trying to get the full panel together during Covid-19. Updated Festival. Updated Taste Nirvana.


What are the best coconut waters? Judging by the amount of shelf space devoted to them in grocery stores, coconut water is a popular item. Not being a huge fan of the fruit, I had never tried it until it was recommended to me by several doctors. They extolled the virtues: low in calories (the average is 55  per serving), lots of electrolytes, more potassium than a banana, no fat, no cholesterol, and an easy way to hydrate. I decided to give it a try and picked up a carton at Trader Joe’s. It was terrible; I nearly spit it out. It was weeks until I gave another brand a try. The second, Amy & Brian’s was much more pleasant and easy to drink, which led me to investigate the wide variety of brands available.

Some of their websites promise all kinds of miracles. For example, CocoFresh claims to “help with rashes, kill intestinal worms, check urinary infections, is a tonic for senior citizens & sick people, cure malnourishment, treat kidney & urethral stones and eliminate poisons”. Another “increases semen, promotes digestion, and is a “proven pitta-pacifier” with a pranaropana-life-restoring-capacity”. Huh?

Over the last six months, I have tried many brands and have found a huge variation in taste. Some were too sweet, some bitingly acidic, others tasted like a chemical brew, and a few had little flavor at all. It occurred to me that it would be worth the time to do a taste test: What are the best coconut waters?

I held tastings over four nights with 17 intrepid friends, rating 18 brands in a blind tasting (additional brands were added in later tastings). Here are the results, with the top brands listed from lowest score to highest.

One issue that gave us fits – inconsistency. At first, I thought I was losing my mind when I did tastings with the second and third groups – ratings were very different than the first group. After buying samples of the same water over three months, it became clear that aside from the big-name brands such as O.N.E or Naked, the overall taste varied considerably from batch to batch. The smallest, least processed waters such as Harmless Harvest had a wide variation in taste, with two groups calling it the best, and two groups the worst. This is the reason you’ll see divergent comments in the ratings, but in the end, enough people participated in the tasting with samples from different sources so that the averages worked out. I discussed the issue with a couple of juice company representatives, and was told that “much like wine, the flavor of each coconut varies, especially from season to season and the age of the coconut”. Apparently, young coconuts are best for water whereas older once are best for industrial uses. In addition, some brands add “natural flavors” or sugar to ensure consistency between batches. Therefore, these ratings are subjective, based on the taster’s preferences, and the particular batch of water. I did go out of my way to buy one of each brand from three different stores.

One trend over the years since this report was first published is the rise of more “artisanal” coconut waters. For instance Trader Joe’s cheapest coconut water is rated dead last, but their refrigerated version earns a much more respectable 8th place. Also, prices on coconut waters go up and down like the stock market. If you check different stores, you can find a price difference of $1 per can within the same brand. For this reason, though I update the prices regularly, you may find differences. One thing I did highlight is whether they have been pasteurized as this is thought to make a difference in nutritional value. We’ve changed our list of best coconut waters – the “Not recommended and “Fair” are no longer ranked by order of preference. There were so many similarly bad waters it was becoming tedious to rank them. 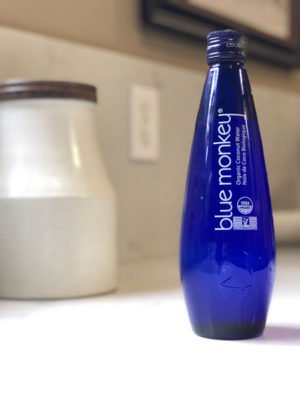 On a June 2019 trip to the bay area, I picked up a new version in a fancy blue bottle. It had a good toasted coconut flavor but was overly sweet. Between the bottle and the French writing on it, It feels like a gimmick. The rating remains the same.

CocoCoast: Metal can, organic, 100% “green coconuts”. We found this at Providore Fine Foods, a local, upscale grocery store. They usually carry top-notch products, and even though it was $3.39 a can, we bought two based on Providore’s reputation.

Coco Joy: Metal can. From Vietnam. $17.7 per ounce. They claim no added sugar/preservatives and not from concentrate. I find that hard to believe. Another terrible coconut water, this tastes like sugar with a hint of coconut. For the limited Covid panel, we couldn’t get it down. This stuff is just wrong. 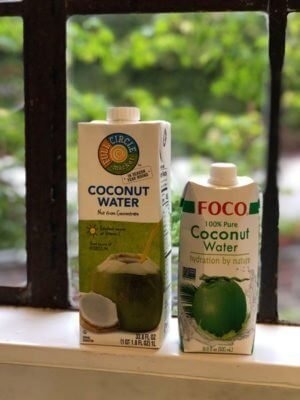 Festival Coconut Water: this brand recently appeared in most major stores as well as online. The price is right – at currently about $1 per 16.2 fl oz. 100% organic. Metal can. Thailand. We just retested this with the full panel. The cost per can has jumped 49 cents since 2019. (Retested 8.27 with the same results – we both spit it out.)

Trader Joe’s Organic King Coconut Water – Cardboard container with an attached straw. USDA Organic, not from concentrate. Sri Lanka. $.16 oz. We were not impressed by yet another version of coconut water from Trader Joe’s. 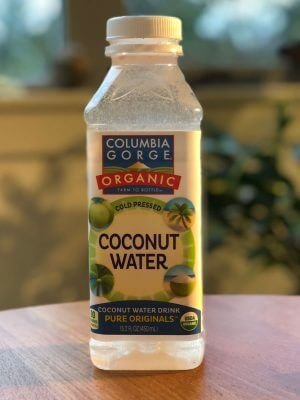 Columbia Gorge Organic – Plastic container, organic, no additives, cold-pressed, distributed refrigerated. Thailand. .27 per ounce. Information is sparse – not much on the web and CGO’s website is terribly outdated and not mobile-friendly. I generally like CGO products but wasn’t impressed with this one. But the taste is what you are here for:

Foco: Cardboard container. From Thailand. Not listed as organic. No added sugar/preservatives. Various sizes. About .10 per fl oz. 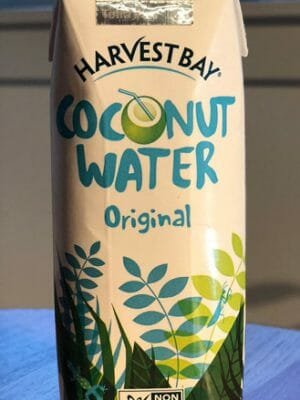 Wild Harvest: 100% coconut water, no artificial colors/flavors, no preservatives. “Micro filtered”. 8oz can. $.10 per fl oz. This is a recent entry that is showing up everywhere.

Kirkland (Costco): cardboard container. Sold in packs of 12. Product of the Philippines. Cardboard container. 11.1 oz.  Organic coconut water, organic sugar, Ascorbic Acid (Vitamin C). Advertised as “99% juice”. The tasting panel argued over this one and ended up being split 50/50. Vitamin C usually gives a nasty aftertaste and this followed that trend. The biggest critics are from those on the panel who grew up in Thailand and the Philippines”. Go figure.

Kroger brand – Simple Truth: cardboard container, organic, no additives. Philipines. This was so similar to Thirsty Buddha (below) that we think it may be the same company. In our 2019 tasting, it was $.89. Now in 2020, it’s gone up to $1.50. Unfortunately, the taste has gone downhill since we first tasted it in 2019.

13. Amy & Brian’s: Metal container, organic, no additives, flash pasteurized. $.17 cents per ounce. No GMO’s, no preservatives. When Re-tasted 2.19 the tasters weren’t as impressed because of high sweetness – interesting as there are no added ingredients.


12. Thirsty Buddha: Cardboard container, organic, no GMO’s, Philippines. See note on Kroger above. We picked this up at T.J. Max for $.89. 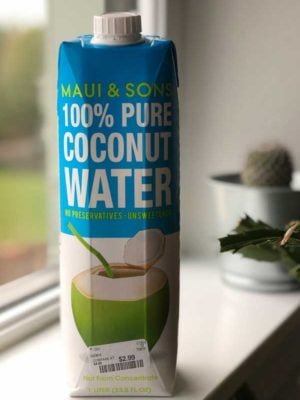 10. Maui & Sons: Cardboard container. Product of Vietnam (seems a bit deceptive to have Maui prominently in the name). 100% coconut water – not organic, but no preservatives. $2.99 for 1 liter, so about $.08 oz. I’m getting some surprising waters as friends have started sending them to me. This, from Home Goods, was a surprise for all of us.

9. Obrigado: cardboard container. No additives/sugar. Water is processed without exposure to light or air, which is supposed to make it better.

4. Harmless Harvest Coconut Water: never heated, sold in the cold case. Plastic container, organic, no additives, cold high-pressure processed. $.32 per ounce. From Thailand. This water varies from an almost clear color to very pink, which they claim is from the antioxidants interacting with light. Note: This was number 16 during our test in 2015. Multiple tastings showed it seemed to vary widely from batch to batch. Though the company used to call their product “raw”, they have discontinued the phrase due to issues with the FDA. In 2016 the company was sued by a group claiming they were not really using organic coconuts, which they settled but denied any wrongdoing.

You can see why had trouble rating Harmless Harvest. Because of these differences from year to year, we feel this brand varies greatly between batches and is difficult to rate. Your experience may vary. Tip: you can get this at Costco in boxes of six (larger size) for <$13. It hides in the refrigerated foods area. 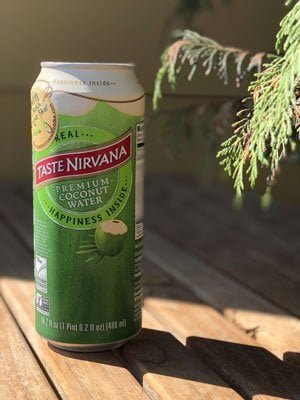 3. Taste Nirvana, Real Coconut Water. A best buy: Metal or glass containers, non-organic, Note: 2020, the ingredients now list <1% fruit sugar, no GMO’s. $.18 per ounce. Thailand Nam Hom coconuts. Instead of pasteurized, they use “HPP” – Cold water high-pressure processing which supposedly preserves the largest amount of taste, nutrients, etc. In 2015 the FDA banned products using this method from sale in the United States. This ban has now been lifted. Prices are steadily climbing on this brand (lately up to $3.29) but it is frequently on sale for around $2.00 a can – I paid $.50 each last month. Thailand. Re-tasted 8.20)

2. (Note: this no longer seems to be available outside of the UK. The old url now goes to Vita Coco, which is way down our list). Coco Community Organic Coconut water: Plastic container. From Thailand. Fair Trade, organic, no GMO. This coconut water is made by the same company behind Vita Coco, also on this list. That is where the similarities end. The coconut water is processed with the high-pressure process like Harmless Harvest and shipped cold.

There was quite a bit of debate as to the placement of Coco Community in the rankings. All agreed it was in the top three. In the end, the similarity between two different lots pushed it to the number one spot, as Harmless Harvest tends to vary quite a bit. Taste Nirvana drops one place, but still does well because of the taste/price ratio – it’s possible to find it for $2 a can, whereas Harmless Harvest and Coco Community cost much more. I haven’t been able to find this water in Portland, but it is available in the California Bay Area.

1. Water from a real coconut. 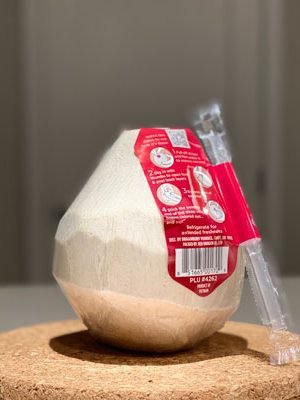 A few markets in our area recently started carrying several brands of whole refrigerated coconuts. Both have the husk removed and one has been stripped back enough that you can puncture it with a little straw that is attached. It’s like a natural juice box. The other one was like a bank vault and I pulled out the power drill to get into it. They both tasted the same. Keep in mind they don’t hold very much water.

Updated 7/17 – Zico has a new formula. Updated 4/17 – Taste Nirvana changed the label, so we retested and found it the same. Also retested Harmless Harvest and found it better – it moved from #16 to  #2, but it proves our point that it tends to vary widely from bottle to bottle. We moved it up with a comment.