Noodles are an important part of Japanese food culture. In fact, the Japanese are as obsessive with their noodles as the Italians are with pasta; both share food influences brought by countries as diverse as Portugal and China. In Japan, noodles show up in stir fries, served chilled in the summer, and come topped with Wafuu style curry year round, but nowhere are they better loved than in soups. Thick wheat udon noodles might be served in a traditional broth made from dried bonito fish flakes and kombu seaweed, while Chinese-influenced ramen in rich meat broths make for a filling and cheap worker’s meal or a way to revive after a long night of drinking. While Biwa is neither a traditional noodle house nor a straight izakaya restaurant, they have found a happy balance between the two. Located in the basement of an old imposing church (they share the same building as Simpatica Dining Hall) in the industrial and pedestrian sparse SE 9th and Pine, there is no sign indicating the entrance, and parking can be difficult to find. Yet the space itself makes for a cozy den, with an open kitchen and corresponding counter seating, and a nicely divided dining room. The glow from candles on the tables and long rows of tall wooden booths against the walls keep everything from feeling too industrial. 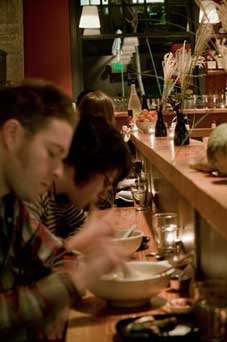 The menu reflects the spirit of Izakaya, including echoes of the current Japanese love of certain foreign cuisines such as Hawaiian marinated fish poke or Korean dishes. Much of the food at Biwa is made up of small plates, but they are far from fussy or precious. It’s more like the Japanese equivalent of pub grub or the down-to-earth food found at countless tapas bars in Spain – simple, but freshly made and inspired. There are so many terrific dishes on Biwa’s menu it’s difficult to pick the standouts.

One big change at Biwa is the evolution and expansion of their sashimi. It’s always fresh, cut properly, and served with inspiration. You might find Atlantic diver scallop with basil and dashi alongside barbarian-style fried, pickled mackerel, while on another night there might be Maguro tuna served with avocado, Korean chili and ginger. On a recent visit I tasted a nightly special of escolar cured with soy sauce. Silky, rich and buttery, it reminded me a bit of the best cold smoked cod (often called sable) you find in some East Coast Jewish delis. Served with greens, shaved carrot and daikon the escolar was a highlight.

You can read Lizzy’s entire review of Biwa here.