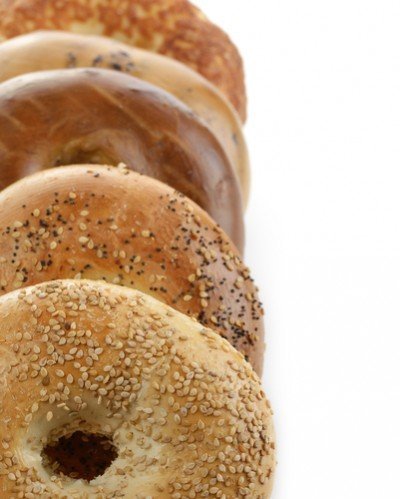 This piece was written in 2005. Since then, Michael and Nick Zukin have written an excellent book, The Artisan Jewish Deli at Home. For Jewish deli devotees and DIY food fanatics alike, the book is a collection of over 100 recipes for creating timeless deli classics, modern twists on old ideas and innovations to shock your Old Country elder. I recommend it highly. FD

Back when most of the Jews here in town lived clustered in and around Old South Portland, through the mid-20th century, there were plenty of good bagels around. Find an older Jewish person who grew up in South Portland and you will hear:

Older Jewish Person (actually my dad): When I was young, I sold newspapers downtown on the corner of 5th and Morrison. . .

Me: No, no, dad. That’s a great story, but what about the bagels?

OJP: You know, you and your brother hardly ever come over to visit any more.

Me: OK, I promise to stop by more often, just tell me about bagels.

OJP: Did I mention I sold newspapers on the corner of 5th and Morrison when I was a kid?

Me: Yeah, sure dad. A couple times. Hang on a minute.

According to my favorite local history book, The Jews of Oregon 1850-1950, three Jewish bakeries competed for the local trade during first half of the 20th century. There was the Star, Gordon’s and Mosler’s. After World War II, only Mosler’s remained. Harry Mosler was a tough guy and his bagels, it is said, were the best anyone ever tasted. There were many other Jewish-owned food businesses in those days: Mrs. Levine’s Fish Market (Mr. Levine was a shochet, the man who slaughtered cows and chickens in the kosher way); Korsun’s grocery and Mink’s grocery; Calistro and Halperin’s delicatessen, one among many Jewish-Italian alliances; and the competing meat markets run, respectively, by Simon Director, Isaac Friedman and Joseph Nudelman. Mrs. Neushin, smoldering cigarette a fixture between her lips, made pickles in her basement; Louis Albert was the soda pop king.
Harry Mosler was a tiny man which might explain his big personality. In the photograph of him I have tacked up at work, he wore a plain, white t-shirt and a once-white apron. Below his bald dome, there was a smudge of a mustache, half-moon ears and bags under his eyes so prominent they announced, “I am a sleep-deprived bread baker.” Two stories about Harry Mosler begin to illustrate the man. One is that he never had change for a dollar–you could only get an extra bagel. At the same time, if you were a child, there was always a free bagel for you. The other story, bittersweet and true, is that as he aged, his grandson Darrell–who had worked for Mosler and even attended a fancy baking school in Chicago–begged him for his recipe to assure at least another generation of great bagels. Mr. Mosler refused. He told Darrell what his weary face expressed, “The work is too hard. Do something else.”

By the 1960’s, the Portland Development Commission’s urban renewal efforts were in full swing. They gave our town a shiny new freeway, I-405, that bounded the central city south and west. But what was the price? Much of Old South Portland was obliterated and its insular Jewish community dispersed. I do not remember the time well–my age was still in the single digits–but I do not think anyone really gave much of a damn about the cultural displacement. Political correctness had not yet emerged as a moral imperative and neighborhood activism was in its infancy. There was another nasty war going on, the civil rights movement was dawning and the only food revolution in America at the time involved untoward innovations such as TV dinners, Tang and Space Food Sticks. Besides, the prosperous local Jewish community was already assimilating at a rapid pace and heading to the suburbs with everyone else.

The original Mosler’s Bakery on Southwest First near Caruthers was overrun in the late 1950’s. The second location, at Southwest Fourth and College, lasted only a few years more. Mr. Mosler’s last days as a professional baker were spent–emblematically–in suburban Hillsdale. Harry Mosler died in 1969 right around the High Holidays. He took his bagel recipe to the grave. No one should have to work so hard.

Since Mosler died, what have passed for bagels in Portland are almost uniformly flavorless, oversized, bread rings. Circular Wonder Bread. Several manufacturers appear to have latched on to the theory that if the quantity is greater, no one will notice that the quality is lacking. The dominant alternate theory–I call it the “abomination postulate” (which, I might add, would be a great name for a John Grisham novel)–is that if you add enough weird ingredients to a characterless dough, you can distract the populace and sell fancy new kinds of so-called bagels. Thus dawned the scourge of blueberry, cinnamon-raisin, pizza and other horrifying rounds. Mosler turned in his grave.

I am not here solely to recount local history nor even to vilify that most unsavory subspecies of bagel producer, Noahbakus crapalotamus. My central task is to pass along a little magic; perhaps not Mosler’s recipe, but some secrets to making a great bagel nonetheless. Yes, you can make a wonderful bagel. Mosler was right; it is hard. But it’s not that hard. Come a little closer and let me tell you what to do:

After a quick, high heat bake (425NF for about 15 minutes), you are done. Your bagels will be great–deep golden outside, with a dense and chewy interior. Relatives, friends and neighbors will kiss up to you and tell you to open a bakery. At least that is what has happened with me. Just ask my dad:

OJP: Just kidding, Mike. Mosler would be proud of you. Your mother and I are, too. You should open a bakery.

Me: Thanks, dad. Maybe I will.

Previous Post: « Phil Stanford vs. Jim Dixon, The Salt Wars!
Next Post: The Beaus You Love Are The Beaujolais »