No more plastic cups.  For $7, you will now be buying a 12.8 oz. glass (down from 14 oz. last year), which can be filled for four tokens.  The one token taster size is now three ounces instead of four.  The shorter taster pour is the result of new OLCC rules that apply to all beer festivals in the state.  The law does allow for full pours at beer festivals to be up to 16 ounces, so you can blame the OBF itself for the full glass shorting.

When asked about the reduction in size of a full pour, a festival rep said that they “couldn’t find a 14 oz. glass that met our needs.” This is from a festival that draws an estimated 80,000 people.  One would think that anybody wanting 80K of anything would be able to dictate their needs, unless of course, their needs are selling less beer for the same amount of money.  In the end, the ideal way to experience the festival is the same as it’s always been: grab a friend or two and split samples, tasting as much as you can while imbibing as little.  Plus, I always prefer tasting out of glass over plastic.  The festival has promised to donate leftover and left behind glassware.

Some sad news for connoisseur: The seemingly successful buzz and sour tents have been eliminated entirely, leaving just 84 beers in total being poured over five days.  More well-versed festival goers may find the selection a little too limited to warrant repeated visits.

Several of the beers pouring at the festival are repeats from years past, or are so widely available that it would be foolish to waste precious sobriety points on them.  To skip:  21st Amendment Hell or High Watermelon Wheat (for goodness sakes, you can buy this in six packs at Freddies), Anderson Valley Summer Solstice Cerveza Crema (see previous), Full Sail Session Black Lager, Lost Coast Tangerine Wheat, Omission (pouring just for your GF GF — gluten-free girl -friend) and Rogue Beard Beer (a gimmick available on tap at all the pubs which I am too grossed-out by to taste).

The following are also readily available in bottle and on tap but are so freaking delicious that they warrant your tokens:

Here’s a list of what I’m most excited to taste:

Further perusal of the program notes read like many brewers have hit an exotic food market, so many adjunct and post-fermentation fruit flavors.  This is not an Iron Chef event, this is a beer festival.  Step away from the produce!  I’ll pass on tasting the following:

A super secret discount package deal will go on sale at 8am this Thursday, July 18th.  These sell out within minutes, so act fast:   www.getmyperks.com/portland

For a complete list of beers and more information: http://www.oregonbrewfest.com

Purchase a $7 glass and $1 tokens for tasting at the SW Oak/SW Pine (center) entrance.

Bike Corral located on the North end of the festival 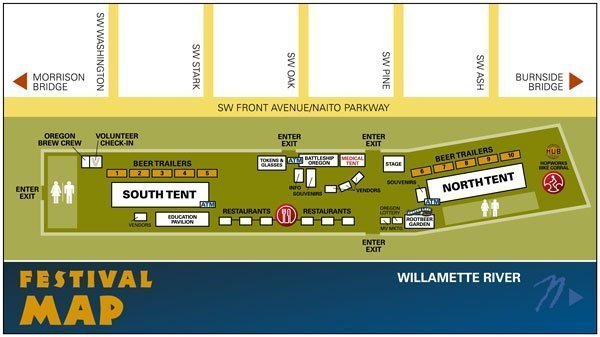 Previous Post: « More and More Restaurants are Loud by Design
Next Post: News You May Have Missed… »