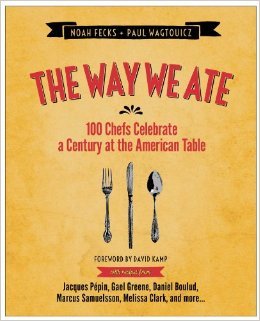 My first subscription to a food magazine (1972) wasn’t Gourmet, but of a publication called ‘Sphere‘ which went on to be Cuisine. I didn’t know it was a Betty Crocker magazine at the time, I only knew that it offered great recipes, taking me to countries I could only dream of at the time. Reading this cookbook was a lovely reminder of the many recipes shared, dinner with friends and family, and how fortunate I’ve been to ride this wave of great cuisine over the years.

The Way We Ate took me back in time, an anthology of recipes chronicling 1901 to 2000, each with a short paragraph about what was going on in the world at that time, and recipe the chef felt represented the year; a chronicle of the 20th century in food and the ‘way it was’. It stirred memories of my grandmother and the recipes she clung to handed down from her own mother and grandmother. The recipes are a virtual who’s who of the food world – Daniel Boulud, Jacques Pépin, Jose Andres, Ruth Reichl, Gael Green, Jeremiah Tower, Melissa Clark – each recipe written true to the style of the cook. Beautiful tight photographs bring each recipe to life.

While the art of cooking has become somewhat elevated over the years, there is something nostalgic about these stories. Whether it’s Carry Nation in 1901 with her zeal to further the temperance movement or Jenn Louis’s family recipe of Lidnivikis  (paired with a Twinkie story 1930) you are captivated by the bits of history attached to each recipe.  Kemp Minifie and his version of the McDonalds Happy Meal (1979) nailed it – I immediately copied and forwarded it to some busy parents. There is a shout out to Daniel Mattern and Roxana Jullapat (clarklewis alumni) with their Chicken Au Riesling With Tangerine Salad along with a short piece about The Los Angeles-Owens River Aqueduct completed in 1913.

The 1945 “Original Brain Tapioca Ambrosia” by Shuna Lydon (1945) and the story of the Electric Numerical Integrator and Computer offers insight on the secrecy of the pre-computer era in the final years of the Second World War. The recipe is interesting and lovely: tapioca pudding for gosh sakes, who makes that anymore?  Besides my mother, who to this day still makes it for her grandchildren.

By the time you get to the 70’s, 80’s and 90’s you are on a carpet ride of recipes, chef notes and stories, made more interesting because of the individual styles of each writer – from Shuna Lydon, “Stir aggressively but intermittently for 8 to 10 minutes, until the liquid looks less like the Milky Way and more like a cloudy day.”

Still, the book at times feels a bit gimmicky. Only in the loosest way do many of the recipes have anything to do with the year they are supposed to represent.  The short historical blurb at the beginning of each recipe barely skims the surface of any historical events. Is it a collection of recipes? The history of a century in sound bites? It’s gimmicky, a recipe book looking for a raison d’être. While it is at times an interesting read, it’s not something I’m likely to refer to.