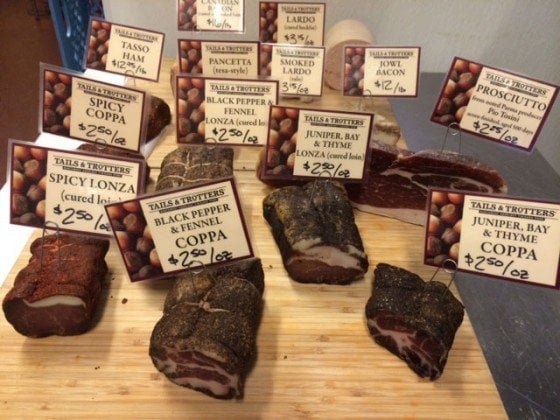 As the interest in cured meats (broadly lumped under the heading of “charcuterie”) has grown and local butchers make more products it can be daunting to stand in front of a meat case.

Tails & Trotters wants to educate our customers about the wide array of whole muscle cured products Tails & Trotters makes from its hazelnut-finished pigs (as opposed to the much broader world of salami & cured sausages).  We created the following brief guide for the main two categories based on the portions of the pig they are made from: bacon and salumi:

Belly – the predominant cut cured into bacon in the U.S. is pork belly

Jowl – Jowls are the cheeks of a pig and are generally very fatty with a single well-marbled layer of muscle. Although much fattier than belly, jowl fat is particularly light and rich, and especially good as a base for pasta dishes.

Loin – Loins are not as commonly cured in the U.S., but are the standard source for British bacons.

SALUMI – the Italian word for salted and cured meats, especially pork. It is also the title of a great reference book by Michael Ruhlman and Brian Polcyn. Salumi by definition includes bacons, but for classification we separate them based on whether the product needs to be cooked before eating. Salumi are generally cured then aged until they lose 20-30% of their original weight making them ready to eat.

Tails & Trotters is the original and premier producer of Northwest hazelnut-finished pork. T&T provides its nut-fattened pork to restaurants throughout Portland and Seattle. We celebrate the whole pig through a dizzying array of products at its retail butchery and sandwich counter at 525 NE 24th Ave in Portland, OR. Visit our website at: www.tailsandtrotters.com  or call us at: 503.477.8682.