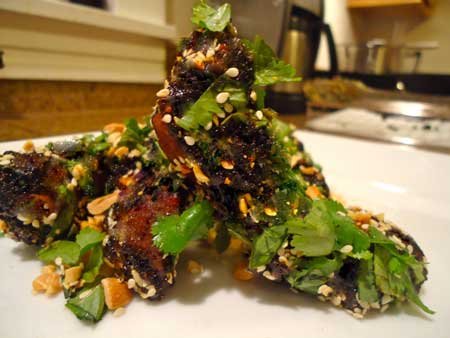 Food as fuel or foolish for food. Eat to live or live to eat. Bottle in front of me or frontal lobotomy. Well, maybe not the last one. There are doubtless more ways to describe the two major food groups (of people) and the gulf which separates their basic attitudes toward the commodities we chew, sip and swallow.

More difficult to understand is why one group is thoroughly fascinated by food and the other could care less; why a four-hour, five-course odyssey at a three star restaurant is a child’s visit to Disneyland for some and sheer tedium for others; why a trip to, say, France, is a chance for food lovers to immerse themselves in the olive oil culture of Provence or the butter fat culture of Normandy while their opposites may thrive on the culture of buildings and their furnishings (excepting, of course, the table).

Is it nature or nurture? Brain chemistry or youthful food-related experience? Someone smarter than me may have figured this out or may yet do so. As a friend of mine and practitioner of Oriental medicine once explained, “It’s whatever.” Deep.

At home, the divide may be as wide as anywhere, even among otherwise compatible people. My former wife epitomizes the food as fuel type. Not only is she a vegetarian–gouging a broad swath across the culinary landscape with that single choice–but she is monotonously so. She prefers the same salad, prepared the same way, night after night, followed by a sensible piece of fruit or two and a package of rice cakes. By my reckoning, this meal must have about 12 calories and a lot less flavor. But it satisfies her. Food is not important; eating is breathing, automatic. On the rare occasion when she complimented the composition of her meal–invariably at a restaurant to which we had ventured at my urging–I clucked with joy and surprise.

Complaining about her culinary color blindness would have been like kicking a puppy. She is generous, kind, considerate, and a great mom. (We did not, by the way, end the marriage over our disparate interests in food.) She also put up for years with my myriad idiosyncrasies, including turning our kitchen into a flour-choked bread production line every weekend, ordering specialty condiments from all over the globe (“But Honey, there’s no substitute for Kashmiri saffron.”) and spending hours dawdling aisle-by-aisle through any grocery store.

For those like her, a discussion of food favorites is an oxymoron. For those of us occupying the ground at the other end of the scale–so to speak–allow me to vent my enthusiasm on a few selected subjects.

Let us begin with our daily bread. Not very long ago, in the mid-1980s, bread in the United States was almost uniformly white, factory-produced stuff, packaged in suffocating, thick plastic bags. Crust was indistinguishable from crumb, and the whole had all the flavor of softened card board or a starch-based sponge. In the rush to produce quantity, commercial bakeries neglected quality and its primary determinant–the passage of time. Even using fair quality ingredients, which, for starters, bleached flour is not, one cannot produce good bread without allowing the flour, water, yeast and salt to ferment together over time–the longer the better. Today, we are fortunate that bread revolutionaries all over the United States have emerged to recapture the craft of bread baking. In Northwest Portland alone, we are blessed with at least one world class bakery, three depending on who you are talking to. Yes, a world without Wonderbread is within our grasp.

And, let us talk restaurants. In my wayward youth, the landscape beyond home cooking and the Big Mac was desolate indeed. Ethnic food was over-sauced “classic” French or “Chinese-American,” the latter leaving the bold to experiment with such exotica as chow mein and bits of deep-fried, battered meat chunks in neon-colored sweet and sour syrup. (Italian food did not qualify as ethnic because whatever made it over from the old country had been assimilated and corrupted so many generations ago as to be unrecognizable to most actual Italians.) Thai food, not a chance. Sushi, you mean raw fish? The mention of a tapas bar would certainly have been misunderstood. And what in the world is a wat?

Nowadays, we order with ease an aromatic tom yum gai or crunchy flying fish roe atop rice, encircled by seaweed, with (or without) a quivering raw quail egg crown, and signal our server to bring us a few extra pieces of enjera as our insides smolder Ethiopian-style. Beyond these glories of globalization, the Alice Waters/Chez Panisse-led new wave of American regional cooking brought us first one and now a second generation of chefs who have set fresh, local and seasonal ingredients as a restaurant table standard, to the dining public’s greater good and the chefs’ own developing celebrity.

Frankly, it’s amazing no one pressed the point sooner. I am afraid post-World War II America was too busy celebrating the flavor-killing, homogenizing influences of technology to remember that a tomato was supposed to taste like a tomato, not an amalgam of flavorless flesh and seedy goo, and ingredient lists comprising a dozen or so inscrutable polysyllabic chemical compounds were not a culinary crescendo, except perhaps in the minds of some food chemists and their craven corporate handlers.

On a related point, here is the hint: “Honey, I need to run down to Uwajimaya to buy a durian.” Just as our dining out choices have geometrically expanded, so too have our opportunities to buy all sorts of formerly strange and obscure ingredients. One can readily find the notorious stink fruit of southern Asia in Portland, Oregon, along with fresh lemon grass, galangal root, star anise, tamarind pods, vanilla beans and cocoa nibs, among about a bazillion other things available at the neighborhood market or via the internet. Then, there are my beloved farmers markets, a profusion of earth’s seasonal bounty in a single square block or parking lot. Fresh fruit and vegetables that mark the passage of seasons, plus baked goods, seafood, meats and cheeses. Goodbye Safeway, hello South Park Blocks. The farmers savor the chance to sell direct to us adoring consumers. It is a chance for the small farmer step back from the brink of obsolescence and pad the bottom line, but also to educate urban dwellers and reconnect them with the high quality goods that have no place in corporate mega-markets. Take the Hood strawberry, for example. It is uncommonly sweet and literally dissolves in the mouth. But, its peak season is a mere three weeks in June; it does not abide much handling or transport; and has a nasty tendency to rot within about 24 hours of picking.

What forces should we credit for these gastronomic halcyon days? Immigration is plainly a large factor. Since the end of the Vietnam War in the early 1970’s, we have been blessed with large numbers of tired, poor and huddled immigrants from all over the world, all yearning to cook free. The relative ease of international travel has led Americans to demand what we have tried and liked abroad. The confluence of these forces has been particularly powerful. Then, there is the matter of baby boom Americans’ evolving sense of health consciousness. Although frequently off the mark, the vain striving for immortality has translated to a demand for less processing and fewer chemical additives and for more organic and sustainable products, even if it means higher prices and thumbing our noses at the swill-producing agribusiness party line. There are, too, the voices that have been there all along, the words of Brillat-Savarin, M.F.K. Fisher, A.J. Leibling, Elizabeth David, and Waverly Root, to name but a few, shouting at us to savor what the earth has to offer and celebrate quality.

Whatever the causes, those who live to eat have never seen better days. I salute whatever and whomever brought us so far so fast and share in the celebration of food lovers everywhere. And to those for whom good food still holds no allure, you don’t know what you are missing–which is fine, I suppose. More durian for me.