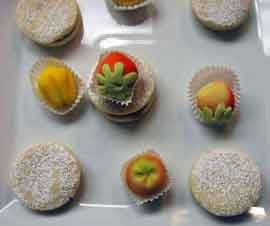 For those of you who don’t know who James Beard was, here’s a quick explanation: James Beard was born in Portland, Oregon in the early 1900’s. His desire was to be in the theater in his early years, but failing in that endeavor, he turned to a passion he had gained from his family – food and cooking. It became apparent that he had a distinct ability to write and teach about this subject, and he was prolific author, penning over 30 books in his lifetime. He was America’s first cooking celebrity. In 1955, he established The James Beard Cooking School, and continued to teach aspiring chefs until his death in 1985. The James Beard Foundation reprises his inspiration today by inviting restaurants to cook at the James Beard House (where he actually lived) on West 12th Street in New York City’s Greenwich Village. Being invited to showcase your cuisine at the Beard House is perceived as an honor among restaurateurs.

In the fall of 2005, Andina Restaurant in Portland, Oregon was invited to present a dinner at the James Beard House on Monday, January 23rd, 2006. Andina is owned by a Peruvian/American family. It’s a two and a half year old standalone restaurant, the culmination of a dream that many folks who open ethnic restaurants have: to bring the tradition and culture of their country to America’s diners through their cuisine.

After accepting the invitation, the owners began to realize the enormity of moving an entire restaurant’s concept 3,000 miles across the country, then condensing this concept into a service lasting three hours. To address the task, a team was formed to go to New York consisting of: The General Manager, the chefs (present, consulting, and former chefs asked to join in), the Wine Director (that’s me), a valuable kitchen employee who knows the food inside and out, and one of the owners, Mama Doris, who represents the soul of the restaurant.

A representative six-course menu was formulated, highlighting all the unique and diverse flavors that make up Peruvian cuisine. I would call it a combination of indigenous ingredients, which incorporates Asian (mainly Japanese and Chinese) and European (mainly Italian and French) influences. We’ll elaborate more on this later. I got together with wine distributors and two local wineries in Oregon to put together pairings that best matched the food, using wines strictly from Oregon and South America.

In the weeks prior to the dinner, speakerphone calls were exchanged with the Event Coordinator at the Beard House, the invaluable Sal Rizzo. We learned about what shapes and types of china, flatware and stemware were available to us (which would prove moot when the Beard House changed their flatware purveyor the week before our event); when we could have possession of the kitchen in order to prep (it turned out there was no event at the House on Sunday, which afforded us a full day and a half of prep time); which equipment was on site, and how much space there was to store our perishables, non-perishables and wine. We watched a virtual tour of the House’s kitchen that is provided on the website, and got the lowdown on how we’d be able to serve up to 100 guests in the tight quarters this old brownstone affords.

Forearmed with the above information, we departed on Saturday night on the midnight red-eye flight out of Portland, which would get into JFK Airport at 8am. Here’s how we then went about putting the dinner together.

SUNDAY
After getting to our hotel adjacent to Washington Square Park in the Village at about 9:30 AM, we found out that our rooms couldn’t be occupied until after 3:00 PM. The luggage dropped, we headed out to Chelsea Market on 9th Avenue and 15th Street. This market has it all, fish, meat, produce, wine, art and the offices of Major League Baseball. It’s laid out in loft-like spaces along a corridor between 9th and 10th Avenues.

Orders had already been made for the meat, fish and some of the produce we needed. A setback occurred when the chefs found the limes were too large. We usually work with key limes, and they play an integral part in a number of the restaurant’s dishes. Wine guys are window dressing on a food-buying expedition, so since I grew up in Greenwich Village and knew the area, I set off in search of key limes.

It quickly became clear that key limes are tough to locate in January in Manhattan. I scoured the neighborhood, in all the elite shops, and completely struck out. The streetwise New Yorker had to return empty-handed to the group. Luckily, one of the chefs bailed me out, having worked out a deal for a Monday delivery to the Beard House (from the same guy who said he didn’t have any key limes), albeit at a higher price.

MONDAY MORNING
A ringing telephone brought me out of my jet lagged stupor around 9am. One of the chefs was on the line. “Hey Ken, a couple of things have come up and we need 35 more avocados, you know, not too hard and not too ripe, 4 lbs. of tamarind paste, some banana leaves for presentation and at least 100 quail eggs. If you can get those to us ASAP, that would be great. Thanks buddy, bye.”

It took a few moments for this to sink in. We were ten hours away from the door opening for the dinner and we needed product. For some reason, the thought came to me that I could find quail eggs if I went to one of the numerous Asian markets in Chinatown. I grabbed a quick shower and headed to Canal Street.

It was raining, the streets were teeming and in the markets along Canal, Mott and Mulberry Streets the vegetables, fish, meat and birds looked great, but no quail eggs. And guess what? Nobody in these markets speaks English. When I would ask for quail eggs, it was as if I had said, “Doorknob milktoast hobnail earlobe.” This was getting me nowhere. It was nearly noon.

Whole Foods came to my partial rescue. I took the subway up to Union Square and searched out the produce manager. “Yeah, we can give you a case of 48 avocados and throw in a restaurant discount.” Good start. Banana leaves? Quail eggs? No shot, but I found some tamarind paste, scooped up the last five jars and headed back to base camp.

At the Beard House, Andina’s GM was calling me to say he had found the quail eggs and banana leaves (just in case you ever need them, they were at Citarella on 9th St. and 6th Avenue). The chefs were rocking in unison now, and the small kitchen in the old house was humming with an energy that is only found in fine restaurants. It was a familiar and comforting feeling. At this point, I knew we were going to be fine.

MONDAY EVENING SERVICE
The service staff at the Beard House appeared relaxed, and went about their setup as if on automatic pilot. They had seen it all before, and had probably answered the exact same questions we posed numerous times. Their aloofness actually inspired confidence. Something really interesting happened at lineup (a short conference between managers and staff outlining strategy just before service). Mama Doris, Andina’s owner from Peru, was giving the mostly Latino staff an overview of what the restaurant was about, and how the country’s culture and local products are portrayed in each dish. I saw an attentiveness and respect in their eyes. Her passion and sincerity indicated that this dinner was destined to be a bit different.

We opened the evening with fresh Pisco Sours, a traditional Peruvian cocktail. We were serving 85 people, including a mix of invited press, board members and Beard House Foundation members, and the public at large. After the crowd was seated, Mama Doris spoke about the food and I had a few moments to talk about the wine pairings. The stage was set.

I honestly believe the people were taken aback by what came to the tables. This sophisticate crowd didn’t really know what to expect from Peruvian food, and its flavorful finesse, matched with the appropriate wines, had caught them off guard. As I circled among the diners, explaining the tastes of each of the wines, one comment after another confirmed this sort of happy surprise. At evening’s end, after the chefs had taken their well-deserved curtain calls, I was told something by one of the servers that provided a synopsis of the very reasons we were chosen to be at the James Beard House that night. She said, “We normally have three garbage bags of food left over at the end of most meals here. Tonight we have less than one. All the plates are coming back empty.” Pure music. We had hit a home run.