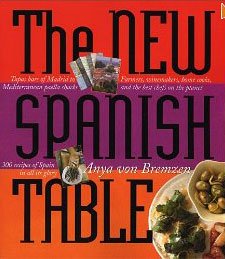 “I love this book,” said Anya Von Bremzen, James Beard award-winning author and contributor to Travel & Leisure, Food & Wine and other publications, on her swing through Portland as part of a 25-city tour for her latest work, The New Spanish Table

. “This is my fifth book, and it’s got everything that I want in it: really good recipes, very solid… And it also has a lot of cultural stuff, so it can be an armchair traveler sort of read.”

Von Bremzen has made a career of exploring the foods of her native Russia, the Caribbean, the Pacific Rim and South America. Between TV and radio interviews this past Monday morning, and teaching a class at Sur La Table in the evening, Von Bremzen lingered for an hour over espresso to discuss the confluence of science, cuisine and culture that reigns in Spain today.

So, why Spain, why now?
“Spain is just such an exciting place to be right now. It’s actually been brewing for a long time. You’ve probably heard of the chef Ferran Adria; he was on the cover of Time magazine. The first time I met him was in 1996 and he just got his third Michelin star and his restaurant was empty; today, they get 500,000 reservation requests a year; you can’t get in. And he really created a whole movement around him; the whole Spanish thing is the cuisine is very experimental, it’s very scientific, and at the same time they’re really open about it; the whole country is like a cooking school with open doors, so anyone can go to his laboratory, even if you can’t get into the restaurant; you can go into the laboratory in Barcelona where he experiments and see what he’s doing.

“On the one hand you have this interesting, out-there, avant garde cuisine—and it’s not just a fad; it’s seriously about reexamining textures, they’re doing very major scientific work about cooking temperatures, textures, new emulsifiers. Essentially, look, you emulsify something with an egg yolk and some flour, whatever; how boring; it kind of obscures the taste. If you look at the French techniques, they have reductions, and it’s like, ucchhh; everything is sludgy and heavy and masks the natural taste of the ingredients. So [the Spanish] went the other way, and said, how can we make it lighter, and more concentrated, and how can we really distill the essence of the flavor? And this is what the research is all about, so, it’s not just about being weird, it’s about something that’s very systematic.

“At the same time, the traditional cuisine is incredible at this moment, because they’re learning from the avant garde, and they’re caring about cooking temperatures. It used to be that they overcooked seafood, like they do in all traditional places. Now they know; they know the science, so everyone is cooking better than ever, and there’s a huge interchange between the traditional and the avant garde; they’re all friends; these far-out chefs go to these really traditional restaurants and vice versa, so the entire country is like one big cooking laboratory. In the Renaissance, you painted; in Spain at this time, you cook. It’s how they express their creativity. At the same time, there’s a huge revolution in wines, olive oils, ingredients, so it’s just Spain’s moment right now.”

The innovation seems to be moving south, from France through Italy to Spain.
“It’s natural because France is really tired; they have too much ego; too many celebrity chefs, haute cuisine has become too expensive; there’s kind of a revolt among the population; they don’t want to support this cuisine anymore, so everyone’s doing bistros, and it’s cute but, they’re not breaking any new ground. They’ve seen it all before. The Italians still want their Sunday lunch; they don’t care—though there is a whole new wave of Italian chefs influenced by the Spanish. But in Spain, the economy is booming, the politics are really nice, great government; the art scene is booming, it’s the combination of social factors and cuisine. During Franco, Spain was really isolated: poor, destitute, under a repressed government. After Franco died in the seventies, there was this huge rupture; everyone wanted a new lifestyle, and eating modern food was part of this new freedom, so it all collided and here we are. I think, hopefully, my book reflects that excitement… If I had my way, I would stay in Spain another few years; there are three more books where that came from.”

Do you see the influence here in the States?
“Yeah. I was just in Houston and Atlanta, every city almost, has its own young chef who is really smitten with this science-driven cooking. Chicago has a whole scene; they call them ‘techno-chefs.’ I think science is definitely going to be huge. The Spanish have discovered all these new techniques and everyone is very infatuated with Ferran Adria; so that’s one of the movements. Another movement is still the Alice Waters market-driven cuisine; it’s comfortable, people like it, but traveling with my book, I’m actually astounded at how sophisticated the consumer scene is. I was just in Texas for a week, and the Central Market, it’s [the size of] three football fields full of the most amazing gourmet products, so I think that the revolution has been in the ingredients; I mean here you can get anything, any olive oil, any cheese, any kind of cold cut. There’s consumer sophistication; I mean, the Texans are almost like Japanese in the way they buy food; they really know; in this market there are 80 kinds of olive oil and each one of them is interesting. I think there’s going to be a huge thing in home cooking, where people are really putting together these nice meals at home.”

We’re seeing that in Portland. When I moved to here, I told Jonathan Gold

, ‘I hear there’s a really great restaurant scene there.’ And he said, ‘Not a great restaurant scene, but a great food scene.’
“Yeah. San Francisco is the same way. People think San Francisco restaurants are so great, but honestly, what you get at restaurants is all the stuff that people cook at home, like cured beets with Laura Chenel goat cheese. I think America is becoming more of a shopping culture than a cooking culture, so it’s good to see there are a whole bunch of experimental chefs trying to change that, but I think mainly it’s going to move in that direction. Why should restaurants bother doing interesting food when they can actually put together a great list of ingredients? That’s what Jonathan was saying. San Francisco is the same way. LA is different because it has all the ethnic [cuisines].”

Can you name a few of the Spanish techniques we might soon be hitting our shores?
“One of them is sous vide, which is vacuum-poached. The Spanish didn’t invent it; the French did in the seventies, but the Spanish have the science down. Basically, you just put something in a bag; you push out all the air and then you cook it at a very low temperature. In Spain, they do this in a special vessel they borrow from a medical labs; it’s used for cooking vaccines, usually. You can sous vide vegetables; you can sous vide pork. Typically, you’d take something like suckling pig, which would fall apart if you cook it for a long time, and you can cook it for like ninety hours at very low temperature, so it will have a texture that you can eat it with a spoon, but at the same time, it will retain its tautness. Quite amazing. Or, a piece of fish you can do sous vide, and it’s going to be completely cooked but, like salmon, it will be completely red. I have a recipe in my book that approximates sous vide, you cover some fish with plastic wrap, and then you put it in a 180 oven, and it seals it. They’re [also] doing a lot of low temperature cooking, so, fish would never go beyond 65 degrees centigrade.

“Then Ferran started foams, and foams are out of style for a long time, but now they have the next generation foams that are called airs, so, instead of having heavy sauce, you have these lovely flavored bubbles that are very light. A lot of liquid nitrogen, something that freezes instantly; so, you can have gazpacho for instance; you stick it in the liquid nitrogen and it’s frozen on the outside and liquid on the inside. Or you can have something that’s hot on the inside but frozen on the outside.”

There are 275 recipes in the book—did you test them all?
“Yeah, many times over, which is why I’m so happy with this book, because usually I’m like, okay, I’ll test it once and then I’ll just fiddle with it. These, I really wanted to work, I was very committed; even when they were almost perfect, I fiddled and tested and retested. Usually you buy a book and if you can cook ten recipes from it, then you’re really happy; then it’s a good book. In this book, I think there are fifty recipes that can really be stand-bys.”

Did you use the Food and Wine test kitchen?
I used my tiny New York kitchen! I made this food for dinner parties, all the time. Barry

[Yourgrau] and I would have dinner parties twice a week, and I’d be exhausted and he’d be chatting. But, it paid off.”

Nancy Rommelmann is a frequent contributor to the Los Angeles Times Magazine and Bon Appetit; lead baker/bottlewasher for Ristretto Roasters, her husband’s coffee roastery and cafe in NE Portland

Previous Post: « What are the things that matter most to you when you dine out?
Next Post: Review: clarklewis »