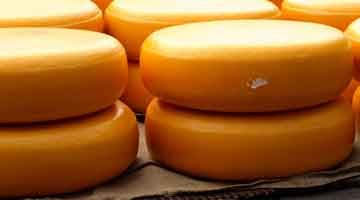 Today I went to a cheese festival. It was sort of like Disneyland for cheese lovers, and I left feeling a lot like I do after a visit to the Magic Kingdom–exhilarated and slightly sick to my stomach.

The annual conference of the American Cheese Society-yes, the one and only, accept no substitutes-hit town on Thursday, and all sorts of cheese makers and fellow travellers were in town to talk about milk and curds and rennet and all sorts of other technical cheesy stuff. They came from as far away as Vermont and Quebec in the northeast and Texas and Louisiana in the south. They brought chunks and wheels and buckets and bricks of their cheeses for judging in 22 main categories and too many subcategories to count. At the end, on Saturday, is the Festival of Cheese, which is like the grand finalé at a Fourth of July fireworks display. All the entries are put on exhibition, with the lucky winners accompanied by their blue, red or white ribbons, and samples of each are cut for the assembled cheese mavens and any locals who had heard about the Festival and were willing to pay $75 for a ticket. Cheese tasting, along with consumption of lots of wine, beer, smoked meat and other things that go with cheese began at 4 and was set to continue until 9.

I arrived a little before the opening bell with nothing in my stomach save for some fresh fruit gelato which might just as well have been nothing since gelato melts pretty fast once you eat it. I was ready for some serious noshing. And I had come to the right place. In front of my eyes was 10,000 square feet of cheese; a giant ballroom with large display tables throughout, each groaning with a payload like you have never seen in your life. Someone said there were 1,000 different cheeses, which sounds about right, though it could just as easily have been ten thousand or a million. All I know is that there was a mountain range of cheese and I intended to conquer it.

After my last all-you-can-eat fancy food extravaganza, I promised myself that next time I would rigorously pace myself. I want you to know, dear diary, that I kept that promise for roughly eight seconds; it was quickly forgotten amidst the abundance. I saw lots of people daintily using the dishes and silverware provided for sampling. A friend of mine-the notorious food blogger Extramsg-was dictating sage commentary about the cheeses into an official looking portable electronic device. Something about grassy flavors and metallic aftertastes. I was laughing and scarfing samples by the handful, though I was careful to attempt to taste each one. My notes are somewhat obscured by smears of what could be camembert, but with respect to most, my comments appear to counsel, “tastes good” or “kind of stinky.” This will, no doubt, be a real boon to future buying habits.

I managed to sample continuously for about two hours, starting with the grand prize winner from Vermont, Cabot Clothbound Cheddar, which had been aged by my favorite fanatical cheesemakers, brothers Mateo and Andy Kehler of Jasper Hill Farm in Greensboro, Vermont. I had the privilege of visiting Jasper Hill in May even though it is not normally open to the public. Mateo generously took time to lead a tour of the operation, during which I happened to spy several wheels of the future award winning cheese. I want to thank Mateo once again for the tour and tolerating my insightful journalistic queries, such as “why are those dairy cows humping each other?” As far as the prize winning cheese, my notes say that it “tastes good.”

After about an hour of initial grazing, I started to feel full, took a bit of a break by eating some of the wonderful fresh fruit, including glorious fresh blackberries, that was strewn about randomly on the cheese tables, then went at it some more until my stomach felt distended and the very sight of more cheese induced waves of post-Matterhorn-like nausea. So you shouldn’t think I took nothing for posterity from my Festival of Cheese visit, I would like to share my personal two prize winners from the event. First, from the butter table, to which I was drawn like a moth to a flame even if butter is not technically cheese, kudos to the “White Chocolate Praline Butter” from Bittersweet Plantation Dairy of Gonzales, Louisiana. Throw away the Mrs. Butterworth’s and instead slather this wonder of the world on your pancakes, waffles or toast, or the body of your significant other if you are into such things. After at least ten samples consumed purely to advance the public interest, I can assure you, dear diary, that this stuff is like the two-in-one oil of pancake toppings-at once subtly sweet and oh so buttery. It was beyond delicious; it was. . . .butterific.

My other cheese choice is, in fact, cheese, but not like one I had ever tasted before. It is a fresh goat’s milk product called “Brandywine” from Rollingstone Chevre, just a cheese ball’s throw away from Portland in Parma, Idaho. Though my notes only say that it “tastes good and is kind of stinky,” my memory is that it was about the size of a small wheel of brie, carefully wrapped in chestnut leaves. The flavor was a haunting mix of herbs, fruit and a slightly sweet, mild goatiness. I could have eaten a pound of it, and perhaps I did, but only in pursuit of analytic accuracy.

My watch said 6:30 when I finally left the Festival for good. It was a melancholy moment, even if I could not eat another gram of the still remaining edifices of the milk-based munchies. I was told that next year’s event is in Burlington, Vermont. Dear diary, I hope I get to go. It will surely be another wild ride.