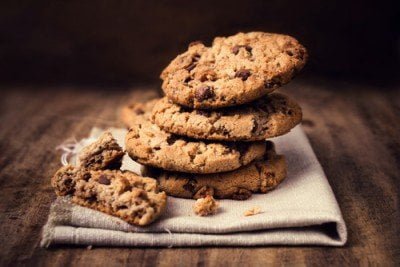 There are certain things in life we just need to admit. For instance, if you were the tallest man in the world, you’d have to cop to it. If you wrote like Joan Didion—whose beam on the unalloyed truth moves her to write even when she is mad with grief you’d have to acknowledge that the process you call “discovering what’s on my mind and then hiding it” is, for us, its very illumination. Me, I make the best chocolate chip cookies.

I cannot tell you why I know the butter must be soft but not too; that the batter should resemble slurry, and that measuring the walnuts is silly if not indicative of deeper issues. (Those who do not like walnuts in chocolate-chip cookies include children, who view nuts where they should not be with suspicion, and denture-wearers.) When people asked for my recipe, I told them it was on the back of the Nestle bag. This, until I taught a baking class for kids (who ate sugar straight from the bag when I had my back turned, and where a group of third-grade boys happily informed a five-year-old who’d tasted raw egg, “Now you’re gonna die!”) and while typing a recipe syllabus, realized I’d over time doubled the vanilla, shorted the flour, added more salt and cut the baking time by a third.

This last is paramount, because aside from not beating the butter and sugar until fluffy (who wants a fluffy cookie?), my biggest tip is to take the cookies out of the oven before you think they are done. Do people do this? No. They wait, or they take the cookies out but leave them on the hot pan (where they continue to cook), or use all white sugar because they were out of brown, or almond extract instead of vanilla, or whole-wheat flour and oatmeal, diced figs and corn grits in a bid to make the cookies “healthy.” What exactly does one say to a woman who adds corn and then wonders why her cookies do not taste like yours?

Which goes some way to explaining why, for the past twenty years and in locales from New York to L.A., London to Vieques, I’ve had no trouble maintaining my “best of” status. And then I moved to Portland, where the oven that came with the house, a Regency VSA with a black-glass top and a bottom coil that recalibrates itself for reasons I cannot discern, has been letting me down. Does it bake a swell pound cake? Sure. What about muffins; Key lime pie; lasagna, spanakopita, and a whole stuffed turkey? Yes, to perfection. But my claim to fame; the bake-sale mainstay; the dough-babies to which I have legitimate bragging rights and have in their way helped to heal broken bones and hearts? No. They’ve been sucking, nearly every time.

Yes, I know; we should all have such arduous problems. But I am in a position where I need to bake these cookies daily for my husband’s coffee roastery and café. Which means that for the past month, my oven and I have been having words.

Me: Why are you making the cookies do that dome thing again?!

Me: Are you saying I need to pick up these cookies individually and poke each one on the underside just to get them to resemble what they’re supposed to look like?

Me: All right, is it that you’re too hot? I put a second pan underneath and that made the cookies spread like potholders. You’re not giving me any peaks, any hillocks; there’s no damn goo!

The oven knows this is an empty threat; that there is about as much chance of me this year spending 75K on a kitchen remodel as there is of me growing a testicle.

My husband told me to relax; that no one else noticed the decline in quality; that I was being hypercritical and did I really need to throw another batch in the trash? To which I said, yes, I did; they were dry little disks; that I had standards and could not under any circumstance market these as the world’s best… which was when I realized how proprietary I’d become over these cookies; that for years I’d done all I could to make them strong and true and for the most part they’d turned out great, they were the surgeons and novelists and architects of the cookie world, but these younger ones, they’d gone off and become Hare Krishnas, or taken to standing on meridians dressed as Quiznos sandwiches.

I was almost at the end of my rope this morning when I decided the bake the cookies a dozen-to-a-pan, the way I used to, rather than the eight I’d been doing so they’d be extra-large for the customers who are paying a buck-twenty-five a pop. And when I opened the oven at about the six-minute mark, in order to turn the pan (which one must do midway through baking or the cookies in back will brown too fast), what did I see but… my old cookies: bumpy, gooey; their bottoms lightly caramelizing, their centers soft. And I realized all the mistakes had not been my oven’s, but mine; I’d been giving the cookies too much room; I’d exposed them to too much space and heat, and that a cookie, like a kid, does better with boundaries.