Oregon State University has announced the acquisition of the papers of “the founding father of craft beer”, Fred Eckhardt. The collection which dates back to the 1970’s should be available by spring. 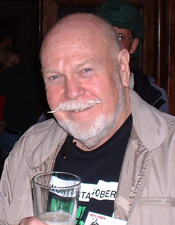 Few in the brewing world had Eckhardt’s influence on the history of beer in Oregon and home brewing nationwide, and his collection covers a broad range of topics related to craft beer as well as sake and wine making. Eckhardt, who died in 2015, was an advocate, critic, educator, mentor and historian, and has been called the founding father of craft beer.

“This is a cornerstone collection for the archives and a real treasure for the history of craft and home brewing in the Pacific Northwest and beyond,” said Tiah Edmunson-Morton, an archivist at Valley Library and the curator for the Oregon Hops and Brewing Archives. “It’s a researcher’s dream that someone would keep all of this and an archivist’s dream that it would be this well-organized.”

Eckhardt became prominent in the brewing community with the publication of “A Treatise on Lager Beers” in 1970, the first modern American book on home brewing.

As breweries opened across the country in the 1980s and 1990s, Eckhardt travelled to visit with brewers and owners, take photographs, keep detailed records, and write for industry publications like Celebrator Beer News and All About Beer. He served on the American Homebrewers Association’s board of advisors for many years, and was one of the founding members of the Oregon Brew Crew homebrew club in Portland, where many professional brewers started.

More information about the Oregon Hops and Brewing Archives at OSU’s Valley Library is available at scarc.library.oregonstate.edu/ohba.html.