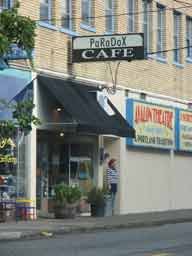 I might be a pig. I might be a backwards-thinking Tennessee hillbilly. I might be a thick-headed carnivorous pre-human. I might also be committing slow suicide with my diet. And yet I have traveled the world, seen several dozen Dead shows, smoked more than my share of grass, lean way left politically, and think of myself as sensitive and open-minded. Can I be both of these people?

Is this what they call a paradox?

These are the things I think of as I eat vegan biscuits and almond gravy at the Paradox Café – but it started before that. I went to their website and found their philosophy: “wholesome common meals at a fair price … seasonal organic produce, organic grains, local and organic tofu and tempeh, free range eggs and hormone free meats … local co-ops … breads, sauces and desserts are mostly dairy and egg free … maple or fructose for our sweeteners.” This sounds wonderful, I thought.

The site also didn’t list their hours or what forms of payment they accept. And when I called to ask, the person answering had to check on the hours. My inner hippie said, “Go with the flow,” but my 40-year-old grump set off a stoner alert. When we got there, I dug the neighborhood feel, the 60s-diner look, the Formica tables, the parquet floor, the egg-shaped light fixtures, and the blue booths−then I sat in a booth and got poked in the ass by a spring. Now, is that quirky, or something they ought to fix? I can’t make up my mind.

The place opened in 1993, and while I wasn’t around Portland then, I suspect it was one of the first mostly-vegetarian places in town. As the Willamette Week has said, “Customers learned to expect a little grease here, a little filth there (but) cheap and easy comfort food, a place where carnivores and vegetarians could coexist in peace.” A friend of mine is familiar with the “vegetarian community,” which my Inner Tennessee Grouch suspects has a lot of cross-over with the Lesbian Community and the Radical Lefty Community, and she tells me that the community “bailed” on the Paradox because of the grease and filth. I also suspect this process accelerated when the original owner founded the more-upscale Vita Café on Alberta Street, and generally when other vegan/vegetarian places opened up around town.

As for the food, perhaps I’m not the person to ask: I refer you to the disclaimer I gave some moments before. I tried the vegan sausage patty and found it dry; I wished it had meat and fat in it. I tried the potatoes and liked them a lot; they were crunchy on the outside, soft inside, and lightly seasoned. I tried the vegan corn cakes and found them mealy. I had the French toast, which is made with sourdough bread and dipped in an egg-free mixture of fruit juices, and I thought they should have soaked it more, though the citrus-y taste worked well. I had the waffle, with oats in it, and thought it was good – and that they shouldn’t try to make waffles healthy with stuff like oats. I read the back of the menu and appreciated somebody explaining what tempeh is.

One friend had the biscuits and gravy and declared it warm, filling, and almost without taste. Another had the breakfast burrito (tofu, cauliflower, broccoli, cabbage, brown rice, whole wheat tortilla, carrots, and kale, all well cooked without added flavoring) and it was well done. We also thought it wasn’t breakfast, because it didn’t have eggs and sausage in it. But, as I say, I might be a pig.

I’m not a foodie, but I can tell you this: I ate at the Paradox with five different people, asked them all what they thought of the food, and every one of them shrugged. So maybe we’re all pigs. Or maybe vegetarian food is kind of dull. Or maybe the Paradox is just a little neighborhood place with a lot of healthy food that isn’t trying to impress anybody. As you can tell, I’m confused.

And yet the Paradox chugs along, sort of an old-school veggie place with a loyal following; perhaps it’s the Chicago Cubs of the “community”: cute, comfortable, reliable, been there forever, non-threatening. A new owner took over in 2006, and folks are trying to figure out how much the place will change – or, for that matter, how much it should.