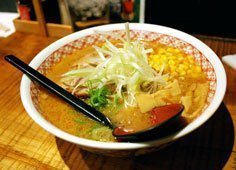 Have you ever dreamt about a certain kind of food? Not necessarily a dream while sleeping, but more of a daydream that repeatedly encompasses your thoughts. I’ve recently had such a recurring dream about Japanese ramen, and the dreams were about the real deal: Shio, Shoyu, Miso and Tonkotsu.

I first fell in love with ramen while living in New York City, where I was born and raised. There was a nondescript noodle house on West 49th Street named Sapporo. The chefs in front of the steaming pots would yell loudly in Japanese when you entered and the again when you left, regardless of whether they had ever seen you before or not. The aromas of that place are forever infused in my mind, as are the glowing bowls of Tan-Tan Men, Mabo Ramen and Shio-Bata Ramen that would slide past as I sat at the bar.

So it became obvious that I had to soothe my ramen Jones. I grabbed a friend, got behind the wheel and drove to Vancouver, British Columbia. The main purpose of the trip, expressed succinctly, was to eat. Also to visit the Granville Market (but more on that later).

We visited the three main West End houses, all located within a few blocks of each other. They vary quite a bit from one another, both in décor and the types of broth they use as the basis for their soup. Prices are similar, however. An order of gyoza dumplings and a bowl of ramen at each should set you back about $11-12 CDN ($9-10 US) before tip.

Monday lunch was at Motomachi Shokudo (740 Denman Street). As usual, there was a queue standing outside in the rain prior to the 12 p.m. opening. The tiny restaurant filled to the max immediately. Soft jazz was playing, and the room had an attractive, modernistic feel. I’ve read that the ramen here is made from organic ingredients, and the broth is purely chicken stock. Consequently, the ramen I had (Nama-Shoyu) seemed lighter and brighter than many. Very clean and less fatty, with good balance. My friend and I ordered gyoza at all three restaurants, and Motomachi won that contest hands down. They are longer (nearly twice the length of Kintaro or Benkei) and the casings were crisp and crunchy. By the way, this house features something called Charcoal Ramen. I’m not so sure about that one.

Tuesday brought more rain and another line outside Kintaro (788 Denman Street). It’s always packed here, so the servers pass out menus to those waiting in line to help move things along. This place is very traditional, with the boiling cauldrons directly behind the bar. No music, stern and straightforward service. The broth is made from pork, and the chefs are continually skimming the fat off the top of the broth with huge wire mesh strainers on poles. Kintaro is known for it’s miso/tonkotsu ramen, and my bowl didn’t disappoint. You have a choice of rich, medium or light broth and lean or fatty pork slices (Char Siu), and I opted for medium broth and lean pork. The noodles at Kintaro were the best in town, al dente and snappy. The broth was milkier in color and thicker in texture than Motomachi. A bowl of Miso Ramen at Kintaro is a filling meal that can steel you against the freezing rain outside. The gyoza are just satisfactory and ended up being nothing more than window dressing for that great soup.

Wednesday we tried Benkei Noodle Shop (1741 Robson Street) which opens 30 minutes earlier at 11:30 a.m. and is distinctly larger than either of the above restaurants. Japanese rock and pop music plays continually, and a lot more young people are in the crowd. Everything seems upbeat and hipper here and the décor is accented by wood, paper walls and bamboo. The gyoza was a distinct disappointment, arriving soft and mushy. But the Red Spicy Miso ramen blew me away. Really quite spicy and loaded with minced pork instead of Char Siu slices, I lifted the bowl and finished every drop. Totally different in every way from the soups we had tried before. Like the other two houses, we were in and out in 30-35 minutes.

Vancouver Wine Note: The wine scene in this great dining capital is atrocious. The Province of British Columbia hits each bottle with hefty taxes and the choices are distinctly limited. A lousy Portuguese red can easily cost $45 CDN and a good French Sancerre can reach $80 CDN. BYO is “against the law,” or so I was told. Be prepared to fork out big bucks for mediocre wine.

To top the trip off, we spent an entire afternoon at the Granville Market, arguably the most beautiful food market in North America. Although it was only late March and much of the bounty of spring and summer was missing, everything on display exploded with color. We took a couple of dozen shots of the food, which will be available for shortly. When visiting this gorgeous, cosmopolitan city, Granville Market is not to be missed.