A quick note. This story has nothing to do with food, but as always I memorialize the important things in my life on these pages. You will enjoy this story most if you have ever loved and lost an animal. 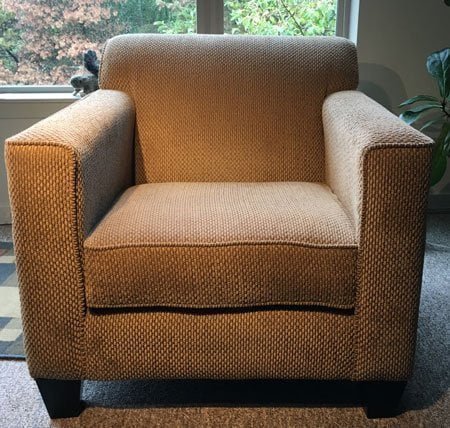 When Russ was found in a forest in Utah, he had mange and was covered with ticks and fleas. At the age of nine, abandoned by hunters, his useful life as a bird dog finished.

Weighing only 38 pounds, he had few teeth, which I am told is common for dogs who spend most of their lives chained. They have little to do other than trying to chew through their restraints. Nursed back to health by a spaniel rescue organization, I found his sad story on their website.

While I’ve always adopted rescue animals, I wasn’t looking for an older dog. But there was something about his photo that drove me to say that I wanted to adopt him. A few months later, after lots of paperwork and a home visit, they caravanned him to the bay area, and I drove down to pick him up.

I was nervous; not sure what I was getting myself into, and when I bent down to say hello, he barked furiously and hid behind the couch. His eyes were a mask of pain and sadness, and as I picked him up and put him in the back of my car, he kicked wildly, giving me doubts. I wondered if this was a huge mistake. He didn’t want to go with me, and I felt no connection between us. But there was something about those enormous brown eyes.

I knew life had told him a lie.

What would any dog lover do in such a situation? I pulled out of the driveway, In-and-Out Burger programmed into my phone. Twenty minutes later we sat under a tree, and I shared my burger and fries, the only time he ever got people food. Then we nervously headed back to Portland. 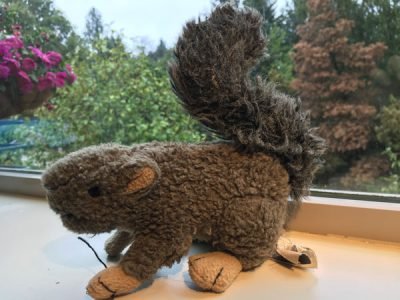 Nine hours later he took his first elevator ride, and we were both surprised to find that a neighbor had hung a stuffed squeaky squirrel from the doorknob as a welcome home present. Russ jumped and pulled it down, the squirrel furiously protesting as he went through the motions of breaking its neck. From that time on, he and that toy were inseparable.  He kept it with him while he slept, and if we went out the door without it, he’d rush back, as a ride or walk without his friend was just not right; he’d never abandon it. At one point, that damn squirrel was in such bad shape I found him another, and stealthily switched it out. That’s when I learned he could actually roll his eyes, and I was forced to dig the old one from the garbage. He spent a happy evening sitting in his chair, watching while I sewed various tears back together.

This chair was his sanctuary. If we were home, he’d be curled up in a ball, feet running in his sleep, waking every so often to prop his head on the arm and sniff the breeze coming through the window, or to make sure I was still nearby.  He was the total opposite of my previous dog, who had been overly independent, which with therapy, I learned not to take personally. (Though he had been a wonderful dog, in the cuddle department I had been left unfulfilled.)

Russ, however, wouldn’t let me out of his sight. I grumbled to friends that I’d gone from one extreme to the other. I’d frequently open the bathroom door, to find him with his ear pressed up against it. My return from a trip to the garbage chute was an occasion of joy, of running in circles, rubbing up against me, and lavish kisses. As you may imagine, I didn’t try to go many places without him.

At first, I was stupid enough to think that he would sleep in his bed, and I’d sprawl out in mine. This plan lasted less than a week, as I’d always wake up to find he had crawled up next to me, and was spooning. Finally, I gave in and put a blanket down to define his own space. During the night, he would manage to move it around, and would end up taking two-thirds of the bed. Playing the part of the fool, I’d desperately hang on to the edge, trying to figure out a way to turn over without waking him up.

It didn’t take me long to figure out what made Russ happy. His turn-ons were long walks on the beach, long walks in the woods, long walks along the river… I’m sure you see a pattern here. Pair these activities with peanut-butter dog snacks, cuddling and bully sticks, and he was happy. Turn-offs included chasing balls, ducks he couldn’t reach and wet feet, the last taken to silly levels, as he was prone to stand chest deep in water, pulling each foot up in turn and licking it dry, before putting it back down and picking up another.

Russ was a remarkable fitness coach. When I first adopted him, I wasn’t in great physical shape. Years of MS had taken its toll, and there were days I had trouble getting around the block. The rescue organization had expressed reservations about my condition, but decided “putting him with you is better than putting him to sleep”. Not exactly a hearty endorsement. Our first month together in 2011, we averaged 2,100 steps a day, but with the help of new drug treatments and the determination of my fuzzy fitness coach, we totaled just over 3 million in 2015. Though my brain was still a mess, he had renewed my interest in living.

I hardly needed a fancy watch to prompt me to quit writing and take a walk. Every few hours he’d get out of his chair and nudge my arm until we headed out the door, squirrel and leash in mouth and hand. He seemed able to tell when I was having writer’s block, or was stuck on a coding problem, and though it was usually the last thing I wanted to do, he’d force me to take him out. “Just a short walk”, I would say. “Maybe around the block”. But once he got me out of the door, the block would turn into miles. In the first 12 months I lost 11 pounds, and kept it off all the years we were together. More often than not, as we walked my mind focused and I would figure out the answer to whatever problem I had been working on.

Russ had obviously been used to hunt, and though he had absolutely no recall and must be kept on a leash. When he saw a duck he would go into a full point, stiff, paw outstretched, shaking with excitement. A squirrel was especially exciting, sending him into such fits of ecstasy that he’d actually shimmy three or four feet up the trunk of a large tree before sliding back down with a disappointed look. A walk around the lake at Laurelhurst Park, left him exhausted for the rest of the day.

There is a group of older ladies in Mount Tabor that walk every morning, tossing nuts to squirrels as they go. They seemed to think they could recognize each one, and came up with names for them. We were on friendly terms, and ran into them regularly. I’d stop for a hello, Russ for a quick scratch behind the ears. There was one squirrel they were particularly fond of; they named it Ricky. Russ, however, wasn’t a fan. Whenever Ricky saw us, he’d rush out of the trees, chattering and running back and forth just out of reach. Of course this sent Russ into fits of rage, and I’d have to brace myself to keep from being pulled off of my feet.

Then came the fateful October morning when Ricky met an early demise. We were walking down the curved roadway. The ladies were moving my direction, and we all waved. At that precise moment, I saw a blur of movement out of the corner of my eye; almost a flash. The squirrel, heading out for his morning harassment, got a bit too close. Russ grabbed him and broke his neck with a single quick shake of his head, dropping him at my feet. I’ve never seen a more satisfied dog; his tail moving so fast it was almost a blur.

The ladies were a mere 50 feet away and closing fast. I was mortified. Ricky gave a final twitch and died. Worried about the impact it would have on their walk, I caught him with the tip of my shoe and flipped him into the bushes. Moments later we met the group, who remarked on how happy my dog looked. “Russ is practically glowing!” one of them said.

By all measure, Russ was a fantastic dog. I never heard him bark again after the first moments we met. He never peed in the house, and got along with every person and dog we came across. Even better, I could absent-mindedly walk away from a plate of food on the coffee table, and he would resist the temptation. Most of all, he never gave up on me

One a rainy afternoon in early 2016, I tossed his stuffed squirrel in the air, and he sat in his chair and watched it fall. At that instant, I knew my life had changed. The vet found nothing specific, and thought he was just settling into old age, but I knew better. A month later he was deaf, and a few months later, during the space of a week, he went from catching treats in the air, to being blind.

You’d think these things would slow him down, but this was not the case. I became his seeing eye dad, and he adapted quickly. A slight twist of the leash would change his direction, and a gentle tug would warn him of a curb or root. He’d stop and put out a paw, feeling around before we continued. Most people didn’t even realize he was blind; sometimes I’d forget, and feel awful after he would walk into a wall or fall over a rock.

We still went out every day, though the walks gradually shortened. His biggest issue was colitis, which he was plagued with off and off for the entire time I had him. Now it really flared and he became very finicky about food, because many things set off, shall we say, intestinal discomfort.

What does a food focused person such as myself do in this sort of situation? I got really good at making rice, and we’d frequently share a bowl for dinner… err… not the same bowl. Rather than giving him boiled chicken, I started using a sous vide cooker to make it, and when that started disagreeing with him, switched to turkey, offal and then duck. Shortly thereafter an X-ray showed cancer, and since he was over 15 years old, I opted to keep him as pain-free as possible, rather than aggressively fighting the disease.

Early this week, I knew it was time. Russ was tired, and the spark was fading from his eyes. I was running out of things he would eat, and his weight was rapidly falling. Even so, no matter how he felt, a trip to the waterfront gave him a renewed lust for life. The next day I took him to Willamette Park and spent the afternoon stalking geese, swimming in the river and watching the boats go by. Friday it was all about Cathedral Park – looking longingly at ducks, swimming and sitting on the boat ramps, feeling the sun on our backs, and even nibbling a bit of steak tartare. That evening he died peacefully as I held him in my arms.

Now I can’t look at his chair.