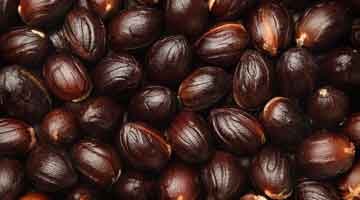 I’m not sure how it happened, but 2007 marked the Nutmeg Renaissance.

[By “Salty Cod” – Note: this article is fictional. A joke. Not serious. We thought it would be obvious, but we were wrong. Thus, this disclaimer. Proceed with caution. Read with care.]

No one knows precisely why, but nutmeg became the hot ingredient last year, a triumph it hasn’t enjoyed for several centuries.

Each year has its trendy ingredient, dish or preparation. In 2003 the rave was over chipotlés. In 1999 everything had roasted red peppers in it. 1996 was the year of the sun-dried tomato. There was no place you could go in 2000 that didn’t feature seared ahi tuna.*

*Interestingly, 2006 was an enormous coup for chocolate and the cacao bean. Unfortunately, along with the introduction of extremely high-quality single-origin chocolate, 2006 also had to be dubbed “The Year of Putting Funny Things Into Chocolate.” To mention blueberries, soy nuts, cardamom, lavender, and wasabi is only the beginning. Maple, ginseng, bacon and bleu cheese followed. When I see garlic, watermelon, and morel mushrooms in a chocolate bar, I plan a public spectacle of uncontrollable gagging. And when some distressed kitchen puts dehydrated beet greens in my hot chocolate or ladles a grapefruit infused chocolate sauce over a tomato, I may leave the planet.

Fennel pollen was briefly ascendant at the beginning of 2007, but its candidacy faltered with a rare instance of anaphylaxis at one of the new Batali-affiliated hot spots (that I’m not allowed to name). Nutmeg picked up quickly and has become the champion food of the year ever since Marc Antollonos, the celebrity chef at Reve, started putting it to a use so far outside its traditional roles in eggnog and apple pie that everyone else had to take notice. His nutmeg rubbed porterhouse is one of the best things I ate last year.

I feel safe saying that there may not be a single human being whose favorite flavor is nutmeg. It has always been on my list of ingredients that most commonly are used to ruin pies and cider through indiscriminate overuse. So it is a strange phenomenon when such a spice rockets into the trendy zone; rediscovered all at once, by nearly every chef vying for pseudo-celebrity, all over the country, for use in all kinds of novel ways.

Even before Iron Chef, there had always been a machismo among chefs to use a very difficult flavor to unusual and successful effect. But prior to Iron Chef and its Food Network kin, there wasn’t the fallout of thirty chefs all following suit with the same ingredient. Once something takes off, with emulators quickly upping the ante to bring out more twists and turns in each year’s hot ingredient, who am I to dispute that nutmeg’s time has come for dazzling national attention?

First, let’s visit some of the places nutmeg has just strolled a little past the boundaries of traditional Northern European use. As a segue from the chocolate craze, nutmeg appears in the Mayan Spice chocolate truffles from Truffleupagus, a Southeast Portland chocolatier. They combine chilies, nutmeg and cinnamon in their blend. Several other chocolatiers around the country have now done something similar.

The Mayan influence is also seen at Oaxaca Tiempo, presumably because the owners and everyone else working there are Mayan. I love the Diego Rivera style murals around the place and the overt politics the restaurant brings unashamedly to the table. A menu may be a strange place for a history lesson, but I don’t mind when restaurants want to spark conversation. The irony is that the Reed College graduates being served $18 entrées believe they are the revolutionaries in the place. But I like to think the unstated but unconcealed threat that one day your server will throw you down in bloody revolution adds something to the sparkle of the ice water he brings you today. Oaxaca Tiempo serves four traditional molés, one of which has a clear nutmeg presence along with hints of pine nut, banana, and mild chilies. Nutmeg in molé is not revolutionary. But the popularity of it is: Oaxaca Tiempo has a 90-minute wait for a table on weekend nights.

Allow me to list some of the more unusual ways nutmeg has touched my tongue this year.

Celestial Window has on its menu a smoked jalapeno and Dungeness crab salad drizzled with a nutmeg white balsamic vinaigrette. King Arthur Bakery introduced a new nutmeg rye, an interesting conversion from the traditional caraway seed. I enjoyed pear nutmeg smoothies that are served with Sunday brunch at Café Flor. The nutmeg port reduction over roasted figs and goat cheese is one of the more popular starters at Indigo. On a similar kick, roasted tomato dusted with nutmeg served with pecorino was a peculiar delight at Mountain Lodge.

Nutmeg was also a feature in several 2007 desserts. Nutmeg ice cream followed on the heels of the cinnamon ice cream trend of 2006. But Marian Chelsea, the new chef at Qiqi, configured a nutmeg orange sorbet with a shot of rum poured over it that is fantastic.

Finally, something that should have been invented years ago: nutmeg caramel. It was between layers of cake in a recipe from Susan Chas’ new book that must have sold quite well because three friends of mine have incorporated nutmeg caramel into various desserts they have served.

One of the more stunning examples of nutmeg’s resurgence is the nutmeg infused vodka at Bar Total (2005: Year of Infused Vodka). You can get it served on the rocks or in their hugely popular Bombzooka, which uses nutmeg vodka, sugar, rose petals and soda. It is also seen in a holiday drink, the PartyCrasher, where it is combined with Irish Cream. Since nutmeg is known to have mild psychoactive properties that are popular with the “legal highs” crowd (also known as the “we ran out of pot” crowd), I imagine there is a peculiar quirk to the drunkenness induced by these drinks, as well as the drinks themselves. If absinthe isn’t soon found at your local pub, look instead for nutmeg vodka martinis.

I was not the only convert to Antollonos’ daring culinary style at Reve. Nutmeg rubbed porterhouse surprised everyone this year. The rub includes nutmeg, and I’m guessing maybe some brown sugar and orange zest, but it isn’t at all like the Chinese brown sauce glooping all over little worms of beef you get at that place on the corner. No, Antollonos prepares a 22-ounce porterhouse, proud with its own flavor and served in the center of a huge plate. The dish only hints at the flavors in the rub, imparting it with nuanced tang, gentle sweetness, and the narcotic spiciness of the nutmeg. It is accompanied by a raw julienne of parsnip, carrot, and zucchini, and puréed yellow potato with chanterelles and hedgehog mushrooms.

For any reader who isn’t already intrigued by nutmeg porterhouse, let me point out that we find it so natural to add black peppercorn to steak that we almost forget that it is a tropical Asian spice. Neither nutmegs nor peppercorns come from steak-eating parts of the globe. Peppercorn (Piper nigrum) and nutmeg (Myristica fragrans) are not too distant cousins either, botanically speaking, as they both belong to the magnoliid clade of plants. And they both were at one time extremely valuable, so much so that they spurred a great deal of European colonial expansion.

Without going at length into the history of the spice trade, let me share one reason why the Nutmeg Renaissance may be of special interest to New Yorkers. It is within our common mythology that Manhattan Island was traded for a bunch of beads. A less known is that the whole City of New York was once traded for nutmeg. In fact, at the end of the second Anglo-Dutch war, England was given control of New Amsterdam in North America in exchange for Dutch control of the tropical island of Run, which was quite valuable at the time as the world’s largest producer of nutmeg.

Will nutmeg beef and nutmeg caramel stick around on menus for the next decade as seared tuna has? Or will they go the way of the Waldorf salad and bubble tea? We can predict food crazes no better than we can the stock market. There will be more strange trends, and 2008 will certainly bring its own set of surprises. When shark fin is so in vogue that you can get it on a bun at Coney Island, Jurassic salt is at the Taco Bell condiment bar, and taverns all across Nebraska serve monkfish liver sashimi, we will at least rest peacefully knowing this too shall pass. On the other hand, whoever thought the nation would want to say “chipotlé” for more than six months? At least nutmeg is easier to pronounce. Pass the nutmeg chips, man.