The winner of our 1998 contest is Granny Moon for this terrific story: 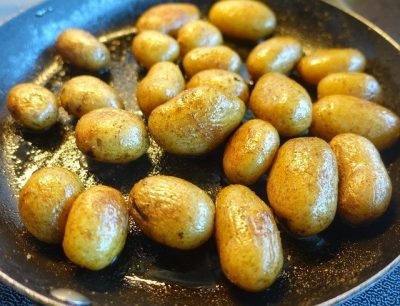 Breakfast, when I was a kid, was a weekend event – cold cereal before school didn’t count. And every weekend it was pretty much the same thing. Daddy would get out his cast iron skillet, place it on the gas stove and start frying. Always eggs. Sometimes bacon, occasionally ham – and if it were fishing season there would be freshly caught rainbow trout from his 4 am jaunt on the lake.

Daddy grew older and ended up having a triple bypass. But he never lost his love of fried potatoes. When he reached the age of 88, I moved to Tucson and lived with him and my stepmom. Over the course of 16 months, I perfected the fried potato. Not the grated wonder that my dad turned out; but a thin sliced, perfect circle of crispness. With a soft center that melted in your mouth.

My stepmom always said that I was spoiling him. But I like to think that I was feeding his spirit – transferring the love that he gave his baby girl right back to him, by way of a fried potato.