Fish Sauce, which I mentioned back in May, has finally opened.

I don’t have any information about a new restaurant going into the old Saint Cupcake place on er… NW 17th(?). It is going to be called Fish Sauce, though the sign also says nước mắm, which is the Vietnamese version of the same thing.

The Portland Mercury has an opening report,

A simple but balanced food menu boasts a handful of tasty starters, a few salads, and a selection of entrees ranging from your standard pho to a delightful curry with veggie options and less standard creations in between. I’m beyond thrilled to have them in the neighborhood with their incredibly reasonable prices, fresh flavors, and a cocktail program by Portland-proven Tommy Klus (of established downtown bar Kask)

Sounds like that clip was written by a PR firm. The Fish Sauce website has a drawing of three people enjoying a good time at a bar, one, who inexplicably looks to be Romanian. Has anyone been?

The shop will be at SW 13th and Washington, on the opposite corner of the same building where the late Corazon was located.

From the press release:

Blue Star’s model calls for mouth-watering “scratch-made doughnuts made fresh throughout the day with organic flour, real butter, and natural flavors.”  Blue Star plans to open their doors this fall.

[Camden] plans to fry raised and old-fashioned-style options in rice bran oil, touted for its relative healthfulness while costing “twice the price of standard frying oil.” It’s a small trade-off, he figures. Production will be in full view of passers-by through floor-to-ceiling windows that surround the space.

Camden says Blue Star will be under the watch of a “top-level California pastry chef” recruited from internet ads placed in New York, Chicago, Los Angeles, and San Francisco. Camden will identify the chef once notice has been served to their current employer. Camden is also in talks to integrate an established coffee vendor into the space.

Why would a “Top-level pastry chef” want to become a donut maker? Weird. Not that I have anything against donuts; I just don’t allow myself to eat them. Anyway, this definitely seems to be the year of the doughnut in Portland. 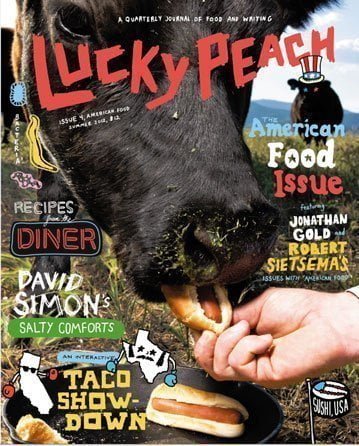 Probably the classiest food publication around, the most recent quarterly issue of Lucky Peach has an interesting article on “Microbial Terroir in Fermented Foods“.

Writer Ben Wolfe included a cross-section of American salami, including our own Olympic Provisions.

Brenda Crow over at OP says “We talk a lot about the process and flavor of our salami, but we’ve never broken it down to this level – it’s fascinating! Ours fits firmly into the cam of funky, wild and beautiful. That makes us proud.”

Olympic Provisions is wild, with as many as five different bacterial species, a yeast, and two molds. the diversity of microbes leads to the funkiness of flavors in this salami.

That quote is followed by some photos of various molds at a microscopic magnification. You’ll either want to rush down to put together a plate of charcuterie or throw everything you have away.

The article is terrific as is the magazine, but, unfortunately, it’s not available online. “Lucky Peach is a quarterly journal of food and writing. Each issue focuses on a single theme, and explores that theme through essays, art, photography, and recipes.”

I’ve seen Lucky Peach at Powell’s Books, but brace yourself, it’s expensive – $12 (but worth it).

One last item. A group of students from Northside College Prep, a public school in Chicago’s Albany Park neighborhood, are “on a mission to eat every kind of food we can get our hands on.” To document their passion, they started The Northside Buffet.

One need only look at the faces adorning the boxes of most items in the frozen food aisle to realize that, on this planet, no type of chef is revered more highly than the Grandma. For some reason, we humans have never been able to create food better at sating our primordial hunger than that crafted by the hand of an elderly woman. When we eat this kind of food, some very ancient part of us, perhaps some remaining DNA strand from the beasts we have evolved from, is quietly and promptly satisfied. Perhaps the flavors that bring about this deep satisfaction come from years of dealing with the injustices of mankind (especially the man portion) melting away into a hot pot, or maybe they come from the wisdom of old age being transferred into an edible form, or perhaps a woman’s senior years somehow bestow wisdom that prompts them to add an extra stick of butter and a cup of cream to anything. Whatever the reason, food made by old ladies usually hits the almighty spot. These wizened cooks make food that, in the words of the great Spongebob Squarepants, “is good for your soul”. It is for this reason that in this issue, our debut into the dog-eat-dog world of high-school restaurant journalism, we will be profiling two amazing restaurants which are helmed by women who are well into their golden years; Two women who have rocked our world.

On behalf of people who love to eat food old ladies make, I say, “Let the Feast Begin!”

Hard to believe, but that’s probably more profound than anything I’ve written. Go read the site – it’s a bit confusing, but you can do it. As the Chicago Reader put it,

…[Northside Buffet] boasts Lucky Peach-style graphics and sharp writing on subjects as diverse as an instant ramen survey, a tutorial on procuring and eating moose, and a set of surrealist pastel sketches of “dream fruit” such as the Oprahcot, the water balloon apple and the Illuminati mind control kiwi. Above all, it has a refreshing lack of the sort pretension and territoriality that plagues the work of us jaded, bitter old wonks.

These kids have put a ton of work into Northside buffet and deserve some visitors. Here is a direct link to a recent issue.