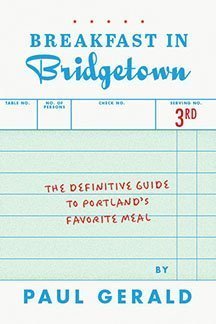 Author Paul Gerald has decided not to update his popular Breakfast in Bridgetown guide beyond the current 2014 edition. It’s no secret that I have always been a fan of his style of writing – unpretentious and humble, happy to point out his weaknesses rather than try to BS us into thinking he knows more than he does. In my opinion he has written some of the best, most readable breakfast reviews in Portland.

Actually, I’ve been done for a while, to the point that I now cringe when I hear about a new breakfast place; still, it’s been hard to let go. This was my baby, my passion, my idea that grew from that moment with Craig all the way to being in a PBS documentary and, more inspiring, the old Burnside entrance window at Powell’s.

But I have come to realize that, if I really I am done, then I need to put a period at the end of this 10-year sentence, so I can start the next one. So I am officially retiring as the Portland Breakfast Guy.” 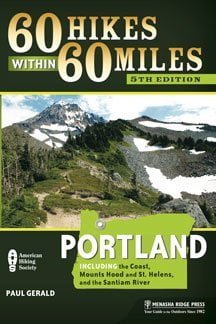 So there won’t be any more editions of Breakfast in Bridgetown, and he has discontinued the breakfast blog, though you can still buy the 2014 edition and get updates to it.

More from Paul – “Although I’ve known about this decision for some time, I am filled with emotion upon announcing it. Writing something, for me, has always been the final step in making it real and complete. So right now, I am truly realizing that the end is here, and exactly what is ending. It’s both sad and satisfying.

I think back to the excitement of developing the idea; the daunting realization of how many breakfast places there actually are; the awesomely fun times with The Breakfast Crew and all the wonderful, crazy people who have been in it; all the folks who helped along the way; and, of course, all the meals. To paraphrase what Phil Lesh says of the Grateful Dead’s 30-year run of shows, my time as the Breakfast Guy all blends together into one long, fabulous meal.

I thank you all for the part you’ve played in it. And who knows, maybe I’ll run into you at breakfast. God knows I still love to eat; I just won’t be taking pictures or writing about it anymore.”

He’ll be continuing his excellent hiking books, giving tours in Italy, writing about Portland’s Heritage Trees and English soccer; you can follow his work here. He’ll also be driving for Radio cab, so if you ever want a ride, get in touch – he’d love to meet you, and you’ll get a 20% discount if you tell him you are a reader.

I had a nice conversation with Paul last year. He was selling books at an event and I happened by, bought a few books. PFD came up in the conversation and he said, “For all I know you could be Food Dude”. Flustered, I laughed and said something stupid. It was nice to meet you Paul, and if I ever need a cab, you’ll be the first person I call.