I used to have this friend Bob, from back east. St. Louis, specifically, but in Oregon that's "back east." Bob was a Deadhead and a pot head, not generally a guy anyone called "uptight," but Bob used to go berserk at the slow pace of the service industry in Oregon. We once got tossed out of the Montage because he couldn't get anybody's attention and finally yelled, "Hey (harsh … END_OF_DOCUMENT_TOKEN_TO_BE_REPLACED

Here's how you do a Breakfast with the Fellas. You meet too damn early on a weekday, 'cause fellas have to work. You can't meet on a weekend, because fellas have to sleep, or they have to get up and do stuff that isn't a breakfast with the fellas.You show up on time so you can give a load of crap to the guy who shows up late (generally the single one), with lines like "Oh, … END_OF_DOCUMENT_TOKEN_TO_BE_REPLACED 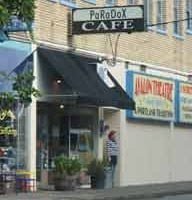 I might be a pig. I might be a backwards-thinking Tennessee hillbilly. I might be a thick-headed carnivorous pre-human. I might also be committing slow suicide with my diet. And yet I have traveled the world, seen several dozen Dead shows, smoked more than my share of grass, lean way left politically, and think of myself as sensitive and open-minded. Can I be both of these … END_OF_DOCUMENT_TOKEN_TO_BE_REPLACED 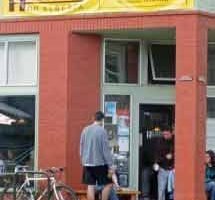 I went to Helser’s once when I had been driving around Oregon for days, hosting a friend from Switzerland, staying in fancy hotels and eating rich food. I was ready to settle back into my Portland routine and calm down, eat something simple and tasty. Manuela was still looking for a place to eat breakfast in America where she could get only what she wanted – pancakes and fruit … END_OF_DOCUMENT_TOKEN_TO_BE_REPLACED

So I'm writing a breakfast book, and this raises a lot of questions in my head: What's the purpose of the book (other than having fun and making money)? What do I do about places I don't like? What is it that people like in a place, anyway? What should I report on? Is the food everything? What if the food stinks but the place is cool, or the staff is nice? What if it's the … END_OF_DOCUMENT_TOKEN_TO_BE_REPLACED