Barista fans rejoice! Owner Billy Wilson has announced that a 3rd coffeehouse will open in the ‘Jewelry District’ at 529 SW 3rd avenue in downtown Portland.

The 500 square foot store in the historic Hamilton Building, will focus on take-away, but window counter seating will also be available. Think white penny tile, dark cabinetry,, and possibly a tin ceiling.

Billy says he “would love top open the second week of April in time for the US Barista Competition, but that’s only two months away, so it may not happen”. 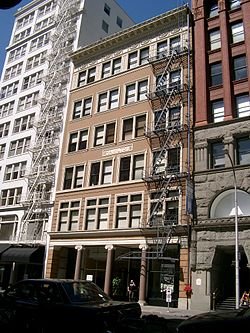 1The Hamilton building is listed on the National Register of Historic Places. Completed in 1893, it is an anomaly among its contemporaries. While many buildings built during the late 19th century were often ornate, the Hamilton building has little decoration. It is said that architects Whidden & Lewis designed a ground-breaking building, built decades ahead of later (and similar) trends in commercial architecture. Decoration comes in the form of granite-clad cast iron entry columns and cable mouldings, set against a Japanese-brick facade.

The building is 6 stories tall, and is named after Hamilton Corbett, son of Henry Corbett, an American businessman and politician. It is also the first building in Portland designed in the Classical Revival style.

The other main retail tenant in the building is Malka Diamonds. This will join the other two locations at 1725 NE Alberta St, and 539 NW 13th Ave.

Previous Post: « Dude… You know what would be good right now, Part II
Next Post: Foodie Pickup Lines – What Would You Say? »