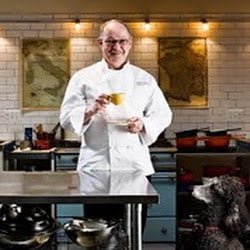 Those of you who are friends with instructor and owner of the Chef’s Studio, Robert Reynolds, may know that he is seriously ill with lymphoma. At this point he has decided to let the disease take its course.

While I haven’t met him personally, we have written many emails back and forth over the years, and I’ve developed quite an attachment to him. I wanted to pass this email along to those of you who are interested –

If you’ve ever been to a Riley party, chances are Robert cooked it; if you’ve knocked around the Suze orbit, chances are you’ve met the man and if you’ve been to other fundraisers I’ve organized, chances are Robert had a hand in it.He’s been a large part of my life and he won’t be here for very much longer. So a bunch of us have got together and quickly put this together:

Get Robert to France, Italy, and New England!

The many people who Robert Reynolds has charmed, inspired, mentored, challenged, lavishly fed and loved would like to send him on a trip to his beloved France and Italy. Our friend Robert has lymphoma. It has taken hold in his brain. He continues to have great strength, spirit, and acuity. But his remaining time will be measured in months not years.

We’d love for him to travel to Virginia and New England, Paris, Alsace, Auberge de Lill, Lyon, and Niort, and, of course, Venice. These are the places that shaped Robert and inspired him to inspire us.

This will be a glorious victory lap in a life well-lived.

You can make it happen by joining us for a celebration for Robert Friday, June 29th. The talented Kristen Murray and Teri Gelber will be cooking a festive summer dinner in the English garden (as weather permits). The charming Suze Riley will be hosting, with loads of help from Mike Thelin, Jason French, Randy Gragg & Phil Smith… as they say, it takes a village.