THIS RESTAURANT IS NOW CLOSED

For many people, when you talk about Korean food, the images that come to mind are those of rooms filled with the smoke from “bulgogi”, or Korean barbecue, and the wildly varying flavors of kimchi. My experiences were somewhat similar, until I moved to Oregon and made some Korean friends. They dragged me (yes, dragged) to various restaurants up and down Beaverton Hillsdale Highway, all around 82nd Avenue, and while I learned enough about the food to judge and speak intelligently about it, the cuisine was never really something I looked forward to. Then BeWon opened, and I’ve been going ever since. I’m also starting to frequent a couple of other Korean restaurants around town, but more on those in another review.

First, some basics. Kimchi, which literally translates as “pickles”, is probably the best known Korean food, and is usually served with every meal. It is a vegetable dish (usually cabbage, radish, or cucumber based), and highly seasoned – though not necessarily hot. Common ingredients are ground red pepper, garlic, ginger, white radish, Asian pears, lots of salt, and fish sauce. From there ingredients can vary wildly. There are infinite varieties, some good, and some bad. Don’t judge all kimchi based on one experience. Its purpose is to stimulate the appetite. The pickling process is quite interesting. Usually whole cabbages are soaked in brine, and then the other ingredients are placed between each of the cabbage leaves. Some traditional methods call for placing it in large earthenware jars, burying it in the ground, and letting it ferment for long periods of time, though some people prefer it fresh. I had a Korean roommate in college who lived on kimchi. Our apartment smelled so bad I made him keep it on the back porch.

Like most Asian cuisines, everything has its proper place. It must harmonize warm and cold, hot and mild, rough and soft, solid and liquid, and a perfect balance of colors. The foods are served in a specific arrangement of small dishes, alternating to highlight the shape and color of the ingredients. There are usually two utensils, a long-handled spoon called “sutgarak”, and two slim metal chopsticks. There are a few traditional manners that should be followed while eating Korean food. Some highlights:
* The oldest person at the table starts first. Wait until they pick up their chopsticks. I like this rule because it pretty much puts me at the head of the line.
* Don’t pick up the rice bowl with your hands. Keep it off to the side, and eat the rice with a spoon. It is customary to finish your individual bowl of rice.
* Eat quietly
* Don’t leave any food on your spoon while eating
* Pace yourself so that everyone finishes at the same time. It is considered rude to finish before an elder.
* After your meal, return the chopsticks and spoon to where they were first placed on the table. Leaving chopsticks in your rice is bad luck and symbolizes death! Ack!
* Don’t use your hands

Of course these are traditional rules, and it’s not like you’ll be thrown out if you make a mistake. I merely offer them as instruction for the next time you are in Korea. 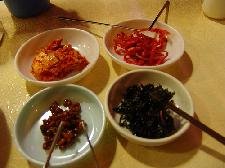 BeWon was named after the secret royal garden of King Tae Jong. It was a favorite escape for outdoor feasts and celebrations. BeWon restaurant is somewhat similar; down a stairway from bustling NW 23rd Street and tucked under another floor, it is like entering a quiet hideaway. The setting is cool and modern, the tables covered with crisp white linens, the service some of the most knowledgeable and professional in the city. There is no smoke to cling to your clothes here; strictly a modern kitchen.
While there is a standard menu, the most fun is the Hanjungshik, or full-course meal. At BeWon it consists of seven courses for $24.95 per person. At least two people at the table must order it. While the prix fixe changes with the seasons, the Summer menu starts with Hobakjuk, a bright orange rice porridge made with three different pumpkins. It is a thick, slightly sweet soup, an interesting and traditional way to start your meal. Next comes Samsak gyu-ja-chae, a little salad of three julienned vegetables with a Korean mustard dressing. It is small, but refreshing, and gives you a chance to dust off your chopstick skills. Next is Gujeolpan, a traditional dish usually eaten at special occasions and very fancy dinners. It reminds me of the Thai dish miang kum, eight different ingredients, separated by color, surrounding little crepe-like pancakes. Take a crepe and put a little bit of each ingredient in the middle. You have a choice of shiitake and black mushrooms, cucumber, carrot, chopped hard boiled eggs, bean sprouts, minced beef. Add a spoonful of the sauce, and pop it into your mouth for an explosion of flavors.

Japchae or cellophane noodles make up the next course. BeWon makes the noodles with sweet potato, though you probably wouldn’t identify the flavor unless they told you. You get a nice, earthy pile with a few mushrooms and other vegetables mixed in, served at room temperature. I could eat an entire bowl of them.

The fifth course is where things really get amazing. It may sound like the food never stops, but keep in mind each of these courses are fairly small. You have a choice of main entrée when you order: dak galbi – chicken in a mild red pepper paste, daeji bulgogi – sliced spicy pork with onions and scallions, galbi – traditional short ribs, sliced rib-eye, and go-deung-uh, broiled mackerel caked in sea salt. There is also a vegetarian option. A bowl of boiling cchigue – tofu bean curd stew is placed in the middle of the table, surrounded by nine seasonal side dishes and bap (rice). By this time your table is like an artist’s palette, covered with pan chan – little bowls of color and flavor: sweet, salty, and sour, sautéed spinach, fermented black beans, dried squid in chili sauce, thinly sliced dark mushrooms, kimchi, mung bean sprouts, cucumber, little slices of some kind of root… I can’t begin to remember them all. The entrees are great all by themselves, my favorites being the pork and the rib-eye, but when you alternate tastes with all the other items on the table, the full spectrum of Korean cooking is illuminated. This is like no other experience I know of in Portland.

After this, you may wonder if you have room for anything else, but the next two courses are designed to settle your stomach. Sujeonggwa is a traditional Korean fruit punch. It is made from dried persimmons, cinnamon, and ginger, and comes with a single floating pine nut. It is slightly sweet, and at BeWon, perfectly balanced. Finally comes bori cha and deok, the first being a wonderful hot tea made from roasted barley. I think the version here is mixed with a bit of oksusu cha, or roasted corn infusion, as it has a slight sweetness. Deok is a rice cake. Hmm… how to describe… it reminds me of Styrofoam (but then most rice cakes do), but has a slightly sweet flavor. The first time I didn’t like it, but by the second meal it really grew on me.

As you can see, the hanjungshik meal is a great introduction to Korean food. Most likely, you will sit back at the end of the meal, stunned not only by the variety, balance, and complexity of flavors, but also by the bill which seems impossibly low at $24.95. The same meal is also available with five wine pairings for $39.95, but I like to be daring and order the chilled Korean rice wine. Once you have had the prix fixe meal, go back and try some of the other dishes. A great starter is the dotorimuk salad of lettuce, Korean pepper and acorn jelly, tossed in sesame soy ($6.95). A traditional dish is stir-fried small octopus in red pepper sauce ($14.95). Tender and loaded with flavor, once again not hot spicy, but very complex. For another surprise, try pajeon – egg battered glazed pancake with scallion, pepper, and assorted seafood. ($12.95).

BeWon is fun, an adventurous place to go when you are tired of the usual routine. Go with a group of friends and each try something different. You’ll have a great time.