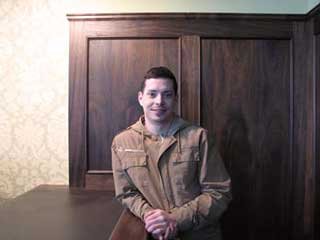 Turns out he’s looking for investors so he can open his own place. In the meantime he’ll be pulling a few shifts up at Coffeehouse Northwest on West Burnside. Billy has won enough competitions to make him one of the rock stars of the Northwest coffee scene. Where does this leave Albina Press? Just fine, I’d guess. Kevin has a fine staff and is very passionate about coffee.

Lucier Restaurant at SW Moody and River Parkway has opened

Some folks saying it is living up to all the hype. I was there the other night with what seemed like most of the Portland restaurant community. I thought it was pretty good, but don’t really think it is fair to to do a detailed review this soon; too many things can change. The food is a bit cutesy for my taste (think 2004 with lots of foams), but overall I had a good experience and will go back this summer. Prices? I’d guess the average bill is around $100 + alcohol and tip. If you want to experience the ambiance but can’t afford a full dinner, go check out the bar. There is a dress code, so use it as an excuse to dress up. There aren’t very many ‘destination’ restaurants in this city, and based on some of my experience’s lately, they had better tune up their kitchens. While I’m on the subject, I’ve gotten many letters that Lucier dumped Scott Calvert, a really nice guy and an excellent sommelier, the night before their opening. He spent months and months putting together what will be one of the best wine lists in the city and was unceremoniously canned the day before the place opened. I’ve heard the sommelier at Fenouil restaurant was also dumped earlier in the week (same company). Not a good way to treat employees when you are first starting out.

The Chili’s restaurant chain has closed all Portland area locations

In my last post, I neglected to mention that the Chili’s chain has closed their Portland area locations. I dated a woman once that thought Chili’s was fine eating. We didn’t last long.

Previous Post: « Should We Review Restaurants That Are Poor?
Next Post: Food and Memory – Food Writing Contest! »