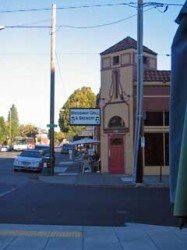 I *want* to like Broadway Grill and Brewery. It’s clear from the packed house on Day Two that others want to do the same thing. And the hordes of staff – from bussers to waitstaff to managers – are bound and determined, in a kind of ‘grit your teeth and SMILE’ way, to *make* you like them.

BUT – the nickel and diming starts early on, with a .95 cent charge to substitute fries for chips with your sandwich. An extra 50 cents to bring a side of thousand island (oh, the humanity!) for the fries (someone up above was watching out for my foodie soul, as my waitress forgot the side and I had to make do with ketchup.) And my server was very careful to Make Sure I knew of the extra charges – which smacks of training that drilled fiscal management over, um, actually delivering what the customer requested (we never got water, either.)

The menu *looks* good – plenty of salads, two different soup choices, a bunch of burgers, and a reuben that finally managed to seduce me. But while the eye candy that appeared on my plate at first *looked* generously portioned, the pastrami was overly salty, while the rye bread suffered from being too thinly sliced, under-grilled, and ultimately – thanks to the whole bottom part of the sandwich, left to sit on the plate too long before serving – limp, soggy, prone to disintegrate in my hands, and ultimately unsatisfying (the parallels to my dating history left me tripping down a memory lane best left un-revisited.) The fries? I’d bet they’re courtesy of Sysco, and also less than stellar.

My frugal side shuddered at the prices for the children’s menu – my daughter’s $4.95 dinner included 1 lone pita covered with sauce and two cheeses, cut in wedges, and 1 glass of lemonade. There’s no such thing as a children’s dessert – instead, they list the regular desserts on the kid’s menu (on the placemat that’s delivered with crayons). This guarantees that your kid will pester you for a three dollar root beer float, or a promised brownie-ice cream extravaganza for $4.50.

And once you cave and agree to split the latter? You’ll be duking it out with dueling spoons, each fighting for more than five bites of brownie, covered with one measly scoop of ice cream, all nestled with room to spare – in a ramekin.

Sadly, I couldn’t bear to tell the manager – who stopped by our table to inquire about our meal – just how mediocre everything was (except for the beer, which I enjoyed.) She did, however, regale me with a bit of Epicure gossip once I mentioned the fact that we’d been watching the place for months now and asked about their ability to seat a large crowd.

She also said that a woman had shown up wondering if the new owners would honor the reservation she’d made for a large party months ago, since she’d put down a thousand dollar non-refundable deposit for the side room. Turns out, no one had bothered to contact her to let her know Epicure was now closed; the Broadway Grill manager gave her the information for the bankruptcy case instead.

Finally, the space division is, um, interesting. I think they’ve actually taken out tables in the front area, while they did manage to nicely carve up that once-cavernous back area.

So – I *want* to like the place. I’m willing to let them shake it out a bit more, and I’ll just have to figure out how to get more bang for my buck, is all. And I’m going to have to go back at least one more time once they start weekend brunches – they promise $1.99 Bloody Mary’s all day Sunday; I’ll have to, um, sample a few to see if they pass muster. Especially since I can then stumble home on foot afterwards….

[Betsy blogs at her own personal website, My Whim is Law.  She used to be a hell of a cook before she overscheduled her life, but now carves out room in the budget for dining out instead.]