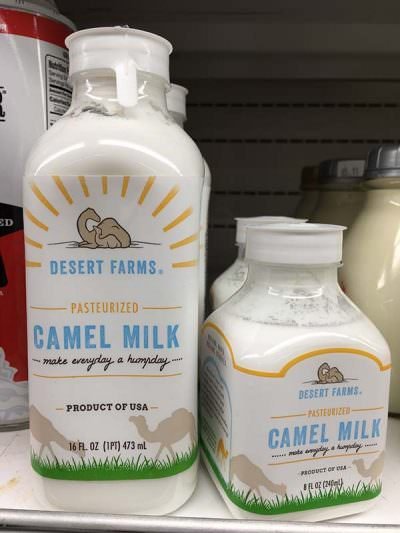 I was driving past Barbur World Foods, when the electronic billboard made me hit the brakes – “Camel Milk Now Available”. I’m surprised there haven’t been car accidents in front of the store.

I’ve seen camel milk while living in the Mediterranean where it is considered more of a special occasion beverage, but never in the US, so of course I had to check it out. Once I posted on our Instagram, people asked what it tastes like.

A few tidbits that might be of interest before I get to my taste test results:

So, to the taste test. According to the website, “It tastes just like milk”. I’d agree with that… sort of. I found it slightly sweet, slightly salty, musky and a bit more grassy than regular milk. Like wine, I suspect that terroir plays a part in each batch, and since it is produced by just a few camels at each farm and processed on site, I am assuming there will be more of a variation from batch to batch than you might expect.

Would I buy it again? Probably not, but I’m not a huge fan of milk to start with  unless it is incorporated into some sort of pastry cream. In that form, I’ll eat anything.

Have you taken the 2017 Reader Restaurant Survey? You’ll find it here.