I don’t have any information that isn’t in the press release, so here you go – 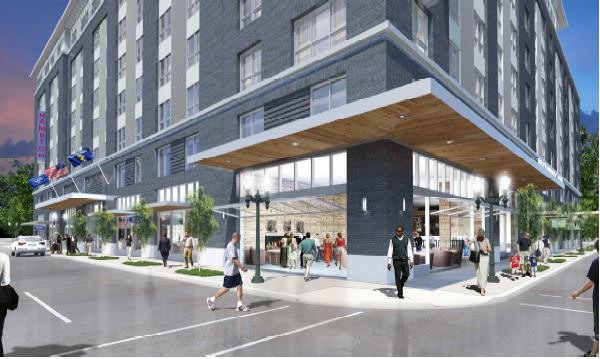 PORTLAND, Ore. – March 14, 2017 – Veteran Portland restaurateur and chef David Machado has signed a lease for a new 5,000 square-foot restaurant in the Pearl District, opening late summer. Tanner Creek Tavern will be located at the corner of NW 9th and Everett, adjacent to the new Hampton Inn Suites, which is currently due to open mid-summer. It will be Machado’s fourth restaurant currently in operation, his sixth as an owner overall.

The restaurant name and décor will bring together a bit of Portland history: Tanner Creek, named for an old tannery built by an early Portland settler in 1845, currently traces an underground path beneath the Pearl District and flows into the Willamette River near the Broadway Bridge. The restaurant décor will call out some of the industrial elements that speak to the city’s early industrialization period: concrete, steel, Douglas Fir beams, tile, and glass. The restaurant will consist of a dining room, lounge area and bar, as well as two private dining rooms, and seasonal sidewalk seating.

Machado has carved out an enviable track record across a restaurant career that now spans three decades. Early in his career, he moved to Portland from San Francisco and opened Pazzo Ristorante as executive chef. He went on to head the kitchens of Southpark Seafood Grill and Wine Bar, Hudson’s Bar and Grill at the Heathman Lodge in Vancouver, Wash.; and The Heathman Restaurant in downtown Portland.  In 2003, he opened Lauro Mediterranean Kitchen, a neighborhood bistro in Southeast Portland that was later named one of the best new restaurants of the year by Bon Appetit.  Two years later, he opened Vindalho to critical acclaim, an innovative and urban-chic approach to Indian food.  Today, he is the owner and operator of downtown’s Nel Centro at the Hotel Modera, and Altabira and Citizen Baker in the Hotel Eastlund.

“The Pearl District is going through its next chapter of revitalization, and I’m really excited to be a part of it,” says Machado. “Plus,” he adds with a smile, “I haven’t had a restaurant in that quadrant of town yet.”