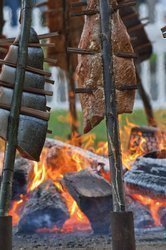 A few months ago, I mentioned that Jason Stoller Smith of the Dundee Bistro, had moved to Timberline Lodge as executive chef.  On June 8th, he was invited to the White House where he served an all-American lunch, with a “Tastes of the States” theme.

The picnic had a guest list of over 2000 people. Smith served food that he felt would represent the Northwest, with smoked salmon, cous cous, and a salad.

From an article in the News Register that ran before the picnic,

“The menu will be seasonal produce and food from small producers,” said Stoller Smith, who has featured similar products at Dundee Bistro and expects his replacement, Christopher Flanagan, to do the same.

“It’s my responsibility as an Oregonian to highlight Oregon’s foods,” he said. “This is just a great opportunity to do this on the nation’s greatest stage for some of the most influential people.”

For the entree, he and his assistants will bake Copper River salmon, which is just coming into season in Alaska. Stoller Smith said he ordered 80 salmon sides for the event.

The rich fish will be threaded onto alder saplings cut and trimmed just for this event. Cedar lashings will hold them onto the stakes.

They will be baked in a traditional way over an open fire — in a 45-foot fire pit dug into the White House lawn.

“We’re building a fire pit right outside the Oval Office steps. Crazy,” said Stoller Smith, who is still marveling at the opportunity to cook for the president.

The alder saplings used were cut in McMinnville, and transported by car to D.C. Wow.