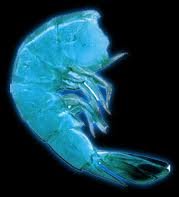 Their seafood was glowing in the dark.

What sounds other-worldly is actually surprisingly common, according to Kaety Hildenbrand, an OSU Sea Grant Extension specialist who works with coastal fishing communities. Marine bacteria can cause glowing or luminescence when they grow on seafood products – a trait that may be exacerbated by the adding of salt during processing.

The important thing to remember, she said, is that “glowing” seafood does not present a food safety problem, nor does it reflect mishandling during processing.

“This is a situation that pops up on occasion and this seems to be a banner year for glowing seafood,” she said. “One person turned her lights off to watch a movie and her shrimp salad started to glow. Another man left his pink shrimp on the counter to thaw, and when he got up, it was glowing in the sink.

“People are calling to ask about safety and we’re assuring them there’s nothing wrong with their seafood,” she added. “I’ve even seen glow-in-the-dark salmon before.”

One reason many people haven’t seen luminescent seafood is that they rarely prepare cooked shrimp, crabmeat and other products in the dark. According to the University of California Sea Grant Extension program, there are numerous marine bacteria that can cause luminescence, including Alternomonas hanedai, Photobacterium phosphoreum, P. leiognathi, Vibrio fischeri, V. harveyi, V. logei and V. splendidus. Some can grow at refrigerator temperatures – especially on seafood products where salt has been added during processing.

“These occurrences actually have gone on for years,” he said, “and there haven’t been reports of illness from luminous marine bacteria.”