The FDA has decided to crack down on the sale of oysters from the Gulf of Mexico. 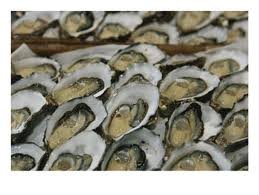 In an attempt to prevent the bacteria Vibrio vulnificus from entering the food system, oyster production in the states of Louisiana, Florida and Texas will be banned during the months between April and October, which will have a major effect on the coastal towns that rely on oyster production. The new “sterilization procedures,”  which would only allow sale of oysters if they are heated, flash frozen or pressurized, could triple the cost of the bi-valve from these regions, not to mention the trickle-down effect on the cost of oysters from other areas of the country.

Doesn’t this defeat the whole purpose of a raw oyster? Do they really think this won’t affect the taste? I wonder if the FDA will spread this regulation to other states if it is successful in the Gulf.

From an article in the New Orleans Gambit:

According to the shelved proposal, raw oysters harvested from the Gulf during warm-weather months would require a post-harvesting process to kill the Vibrio vulnificus (VV) bacteria found in seawater. In the United States, the bacteria makes 30 people get sick after eating raw oysters annually, with 15 fatalities. VV normally doesn’t affect healthy people, and all of those who have died had a pre-existing condition such as liver disease. In the United States, 750 million pounds of oysters are harvested annually with two-thirds, 500 million pounds, coming from the Gulf Coast, and there is total of more than 1.5 billion servings of the fresh bivalves. Anyone getting sick, or, worse, dying should be addressed, but put it into perspective: 30 illness reports out of 1.5 billion.

Until the FDA issued its decision, oyster harvesters and distributors thought they were collaborating with the government and educating the public to reduce VV-related deaths. Since 1991, packages of Gulf Coast oysters have contained warnings about VV, and a cooperative program between producers and FDA regulators was making strides. Voisin says increased education, shortening harvest-to-refrigeration time, and other measures led to a 47 percent drop in VV incidences in targeted states in 2005-2006 and a 37 percent decrease in 2007-2008. “I felt stabbed in the back,” Voisin said, before Friday’s announcement. “In September, [the FDA] is applauding the cooperative program and how well it has worked — oysters are safe year-round as long as you follow the program — and then in October, they dropped a nuclear bomb on the oyster community here in the Gulf.”