Local Choice Produce Market at the corner of NW Everett and 9th is closing this Friday. Sad; No only do I like the store, but the owners are great too. I’ve been there many times. Here is a really interesting question from the owners, who obviously want to learn from this experience:

Thank you all for the many thoughtful Facebook comments. We will miss you too. As we reflect on what went wrong, we are hoping that you can help – not just us, but maybe other small, family owned businesses that risk everything to build their dream. With just a few days left, will you help us? We would like to ask everyone that has ever shopped at Local Choice (please ask your friends to comment) to list the top three reasons why YOU think we failed. Was the location inconvenient? Was it a lack of free parking, prices were too high or too low, product selection was inadequate, bad food, bad customer service, hours of operation…you get the idea. It will just take a minute of your time and could save someone else in Portland everything they have. Please leave a comment at the bottom of this page or send me an email to don.sader@localchoicemarket.com or you can even use snail-mail and send a note to:

For nine months we have struggled, hoping that eventually more of you would come and you would buy more stuff when you got here. You told us that this is the most beautiful market you’ve ever seen. You thanked us for our “local first” promise, you told us that our prices were fair, our food was delicious, our fresh produce amazing and our space – incredible. We’ve offered great, 1/2 price tap beer and wine with fantastic, free live music every Monday night for months – to an empty house. Why? We’re pretty sure that you all do a lot more shopping at other stores in the area, so please – why weren’t we able to earn more of your business?

Please be honest, we’ve already lost everything. You’ve got nothing to lose. Tell us what we could have done to survive. Who knows, maybe we will next time.

Everything is 25% until the closing bell. I wish the Sader’s the best of luck in the future.

Mi Mero Mole is opening a new location in Chinatown. Per the press release

We do not have an opening date yet, but we hope construction will be completed by December. The new restaurant will be located at the corner of NW 5th & Couch in the Goldsmith Building, right off the Max line, next to the wonderful folks at Orox Leather. (The family that owns and runs this leather store are from Oaxaca.) The menu will be largely the same, specializing in guisados (our Mexican moles, stews, and stir-fries), but slightly expanded.  We will still be making fresh tortillas by hand using freshly-ground nixtamal. We are building a dedicated bar, but will remain a counter-service restaurant in order to keep prices reasonable.  Until our staff is fully-trained, we will only be open for lunch.  We currently plan to be open Monday through Saturday from 11am to 3pm.  We hope to expand to happy hour and dinner and maybe even eventually late night or breakfast taco/burrito take-out. But we plan to take it slow. 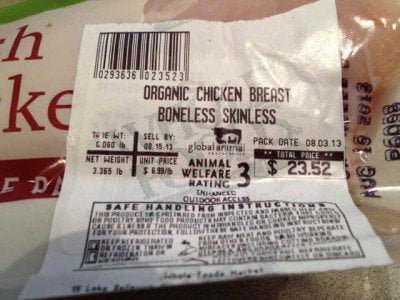 Have you seen these new labels at Whole Foods Market? I had no idea what the “Animal Welfare Rating” meant, so I looked it up. It is a 5 step rating that WF has done with the Global Animal Partnership. ” They have developed the 5-Step Animal Welfare Rating Standards that rate how pigs, chickens, turkeys, and cattle are raised for meat. Standards for other species (lambs and others) are in development…”

The whole rating system confuses me a little bit, but then so does life.

So there you have it

When someone asks me why Mario Batali has so many fans, I point them to programs he’s involved in like this: Feedie – Share Food. He figured that there was nothing he could do about all the people taking photos of the food in his restaurants, so he created an app called Feedie to put a spin on it. The premise is simple. 1. Check the app to find a “Feedies Welcome” restaurant. 2. Take a photo of your meal. 3. Upload and share it, and the restaurant will make a donation to The Lunchbox Fund which provides meals to extremely poor and at-risk school children in South Africa. Brilliant. As of this writing, they’ve provided 827 meals. The only restaurant in Portland where you can participate right now is Lincoln in NE (good on you!), but it is spreading all over the United States.

The one time darling of the Andy Ricker crowd, Ping, is officially kaput. It closed over the summer but was supposed to be renovated and reopened. According to OregonLive.com, those plans have been shelved. “Fresh plans are also being hatched for the storefront that was to become Ping’s new wing, The Oregonian has exclusively learned. Huffman is bringing in Oven & Shaker bartender Ryan Magarian to build a new, 50-seat bar in the next-door space with lively cocktails, Lardo sandwiches and as many as 40 craft beers on tap.”

Your kitchen is going to kill you! In my case it’s my freezer – one day I’ll open it to be crushed under a cascade of Salt & Straw boxes, but for everyone else, your kitchen is going to get you. My first restaurant job was in a place with a really lousy kitchen. There was little air movement, and we’d be coughing at the end of a busy shift. It turns out that cooking fumes are bad for not only restaurant employees, but to home cooks as well. From the NY Times,

Simply put, cooking is an act of controlled combustion — you set oil, fat, and carbohydrates on fire. As a health hazard, incinerating hamburgers and green beans may pale in comparison with lighting wood or coal fires indoors, the leading environmental cause of death and disability around the world. Yet frying, grilling or toasting foods with gas and electric appliances creates particulate matter, nitrogen dioxide, carbon monoxide and carbon dioxide, and volatile organic compounds. (Acrolein, which most cooks recognize as the smell of burnt fats or oils, was used in grenades in World War I because it causes irritation to the lungs and eyes.)

Emissions of nitrogen dioxide in homes with gas stoves exceed the Environmental Protection Agency’s definition of clean air in an estimated 55 percent to 70 percent of those homes, according to one model; a quarter of them have air quality worse than the worst recorded smog (nitrogen dioxide) event in London. Cooking represents one of the single largest contributors, generating particulate matter (formally known as PM2.5) at concentrations four times greater than major haze events in Beijing.

“Because we’re used to the smell, we don’t think of it as an issue,” said Jennifer M. Logue, 32, an air quality engineer at the Berkeley Lab. “When you live in a small building, you cook a lot and don’t use your range hood, which may not be very effective anyway, then you’re probably going to have a problem with pollutants from cooking.”

Maybe people are not dying as the result of eating too much fat. Maybe it’s the act of cooking! As of this point on I shall wear scuba gear in the kitchen, and eat all the pork chops I want.