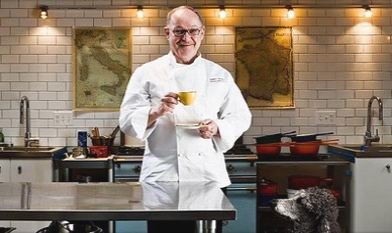 When the news came that Robert Reynolds of The Chef Studio had died, there was a pause in the Portland food scene. Though everyone had known it was coming, it was still a shock when it happened. There was a quiet moment to reflect; no one rushed to post the news, because that would make it true; Robert really would be gone.

Robert Reynolds will be remembered as a chef, instructor, and mentor, but to me, he was “anonymous”.

Back in early 2006, I started getting emails from a reader with very strong, and somewhat French, opinions. He went by the name “anonymous”. We developed an online friendship, chatting back and forth on weighty questions such as “should reviews have a rating” – of course, he was strongly in favor of the French 20 point system, Whole Foods Markets, foie gras, the ethics of reviewing, little gossipy bits, and from our very first exchange, how cooking brings people together.

What Robert forgot to take into consideration, is that he used the same email address elsewhere. In 2007 when he sent out invites to an event at Cork, I realized who he was.

He had a way of getting right to the point. I’ve gotten two-page angry emails from readers that said less than Robert could in one short paragraph. When he thought I was wrong, I’d get an email; concise and to the point. When Robert agreed, I’d get a few simple lines. After one review he wrote:

… What makes anyone think the cauliflower doesn’t react when it’s lopped off the stalk? These arguments should be aimed where it matters – for example, love food and its ability to bring us together around a table; respect how it’s produced from seed to plate; and mix pleasure and pain only when you’re into S&M, then negotiate with the rest of us whether, and how, we want to participate.

Only Robert could mix cauliflower and S&M into one paragraph.
When I heard he was ill, I put a note on his hospital guest book saying “When you get well, I’ll come out of the closet and finally have that drink with you”. I’ll have that drink for you tonight, Robert.