The first branch of soon to be a chain Heart Pizza, has an opening date. The restaurant is located just across the street from Blue Star Donuts and the Cacao Chocolate shop. Co-owners Micah Camden of Blue Star Donuts/Boxer Ramen and Matt Lynch of Boxer Ramen have said their second restaurant will open in March at 672 SW Gaines street in the South Waterfront. Camden worked with perennially available chef Morgan Brownlow to develop the recipes for a rotating menu of ten pies ranging from $12 – $15, and four salads at $8.

The pies start with a classic dough recipe made with Caputo “00” Italian flour, and are finished with high-quality toppings such as Beretta Sopressata, Prosciutto de Parma, Fior de Latte mozzarella, and bone marrow. Selections also include at least four vegetarian options, such as the rosemary-roasted Potato with Hot Honey and Wood Ear Mushroom with Truffled Asiago and Porcini Dust. The pies are baked in a Stefano Ferrara brick pizza oven brought in from Italy, which temps at over eight hundred degrees and bakes each pizza in a zippy ninety seconds.

The accompanying seasonal salads are fresh pizza pairings such as an Escarole Caesar, Fennel with Blood Orange and Almond, and Kale Panzanella. Desserts feature two seasonal house-made panna cottas including a Vanilla Bean with Caramelized Orange gelée and a take on Tiramisu. The shop will supply a rotating list of local beers and a curated, date-friendly wine selection. Take out will be available, as well as delivery by Caviar, Amazon, and Postmates. Heart is also planning to offer a weekend breakfast with its Brunch Pizza, adorned with house-made maple-sage sausage, a baked farm egg, and hollandaise.

You can read the entire press release on pdxfoodpress.com. This is the opening menu: 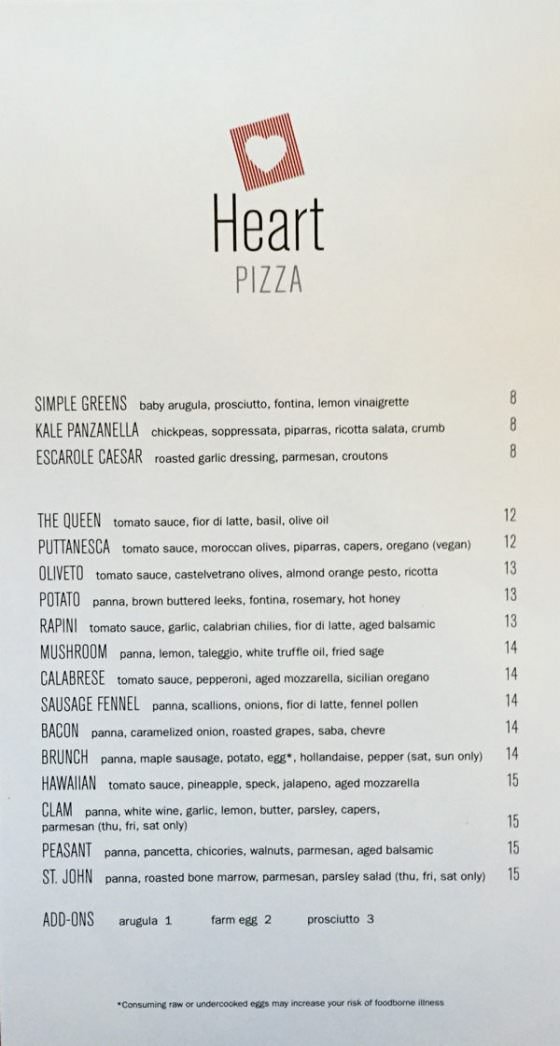