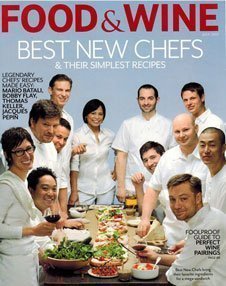 Jenn Louis, chef co-owner of the popular restaurants Lincoln in North Portland and Sunshine Tavern in SE Portland, has been named one of Food & Wine Magazine’s “Best New Chefs”. The July issue features 12 chefs who “are in charge of outstanding kitchens across America”. The editors are said to have traveled to Portland and eaten at the restaurant before making their decision.

According to the magazine, Jenn won “because she obsesses over every ingredient on her menus, from the house-made ricotta in the sage fritters at her flagship, Lincoln, to the olive oil and chocolate topping for the soft-serve honey ice cram at Sunshine Tavern”. The article includes a recipe for her Melon, Berry and Feta Salad.

Previous Post: « Reader Survey 2012: Best Sushi in Portland
Next Post: Would You Buy Scary “Body Parts Made of Bread?” »