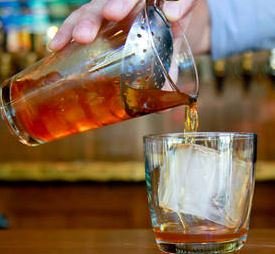 I will admit, I went to McMenamins Zeus Cafe in the new Crystal Hotel about a week after it opened. The food was decidedly unimpressive for the cost, but I decided to wait until it has been opened for a while. Last week, the Portland Mercury critic Tony Perez weighed in with a similar experience and few classic lines-

For an entrée I ordered the grilled pork chop ($21). The flavor was nice this time, and the plum chutney was a great complement, but, as Zeus’ father knows too well, a rock wrapped in swaddling cloth is still a rock. The chop was a chore. My serrated butter knife was no match for its gristle. The server had that awkward moment when he picked up my plate wherein it’s obvious that much of the dish was inedible. There was a violence to it. I should note also that the bed of cheese grits resembled, in appearance and flavor, the bland scrambled eggs they used to serve at camp.