A review of Miss Delta in Portland

If you’d like to skip past memories of my childhood, just scroll down – the review is clearly marked.

I’ve written before about the time I spent growing up in  Maypearl Texas, but I never mentioned the boiled chicken death march, and my plot to get even.

In the ’50s, dinner in the south was a family, sit-down supper. Grace was said, and whatever was fresh on “old Mr. Jackson’s” farm next door was always added to our table. We didn’t know about the organic or slow food movement; we didn’t need to. Our own beef and tomatoes and Mr. Jackson’s corn; most of the time that is what made up our family meals.

In the winter though, things were different. Grandmother didn’t seem to think beef really worked without fresh vegetables, so she’d cook somewhat less desirable things, occasionally going as low as boiled chicken. Yes, you read that correctly; boiled chicken. It was as bad as it sounds.

At the ranch, supper wasn’t over until everyone had eaten every bit on their plates. We didn’t get to serve ourselves; that was taken care of for us. I was always told I was too thin and would be handed a huge, steaming serving. This was fine when we were eating pork or beef, but when it came to that boiled chicken, well let’s just say I was rather critical of food even back then. There was usually a chocolate cream pie piled high with a glistening meringue teasing us from the counter, so to my mind, time was of the essence.

I finally hit on spitting little pieces of meat into my napkin, and slyly putting them into my pockets when backs were turned. Grandmother often remarked what a “polite little diner” I was, so good about wiping my mouth throughout our meals. This strategy worked really well until one night I forgot to empty my pockets, and my fraud was exposed the next laundry day. After that, she’d stand over my shoulder and watch, while I glumly chewed every piece of that damn flavorless chicken. It was like a death march, trying to get it down, urged on by the pie watching over the proceedings. Finally, I did what every eight-year-old boy would do; I decided to get even.

We had some lakes on the ranch – called “tanks” in Texas. They were full of poisonous water moccasin snakes which discouraged fishing, but in an attempt to catch something, I liked to sit up high in the old trees around the edge, and dangle a string with a minnow on the end. The tanks didn’t get fished that much, so more often than not, a big old catfish would take the hook, and before long I’d have them stuck in crevasses all over the tree. It must have been a strange sight.

Grandmother was the happiest, most positive person I ever knew, but she hated it when I brought catfish home. These fish were full of bones, and a pain to deal with. She didn’t want to disappoint me, so would always cook up a mess for dinner, muttering to herself as she’d stick her fingers. The more she muttered, the more fish I’d go out and catch until she finally realized I was doing it so she couldn’t make the boiled chicken. She’d had enough, and consulted old Mr. Jackson. The next time I went over to pick up some beans that had been put up for the winter, he asked me if I’d had problems with the “poisonous tree snakes”. I clearly remember stretching all the way out to my 5’2″ height, tipping back my Sears Roebuck cowboy hat, and saying, “Why Mr. Jackson, I think you’re a pullin’ my leg.” Little Food Dude 1, Grandmother 0.

A few days later she hatched a new plan – she’d cover my catfish with okra. No kid would like that, but she made it too well, fried up in a skillet and mixed with cornmeal, some onions, rough-chopped tomatoes, and poured over the fish. It was so darn good I couldn’t wait to get out the next day and catch some more. Food Dude 2, Grandmother 0.

Finally, we sat down and talked. I came clean about how much I hated boiled chicken and swore I’d eat everything on my plate if she promised to cook something else. The next year she stocked another one of our tanks with trout. Nowadays, every time I see Southern-style catfish or okra on a menu, I flashback to that big old kitchen table, the huge Texas star on the ranch house floor, and grandmother muttering over the kitchen sink. All of this came back to me the first time I walked into the new Miss Delta restaurant on NW Mississippi Avenue and ordered catfish with a side of okra.

Thank you for the digression. Now to the review: 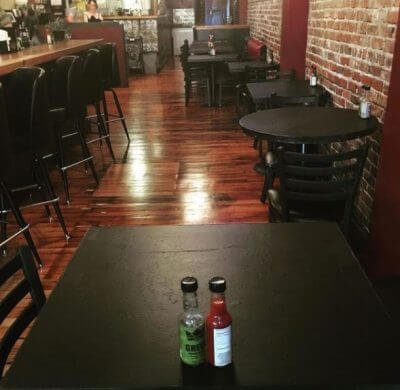 Miss Delta opened in October 2007 in the old Pasta Bangs. The restaurant is a long narrow room, with a bar in the middle offering about ten more seats. There is an open kitchen just past the bar where you can watch the cooks at work. Two unisex bathrooms (one with a charming altar built into the wall) are in the back. Pitchers of lemon water are on each table, so you can refill your glass as needed. A few condiments are also provided, such as traditional red Tabasco, Trappey’s “Chef Magic” green jalapeño sauce (a great touch), and red vinegar. I was glad to see the menu offered a choice of both sweet and unsweetened tea.

A full bar is available, with a large choice of house drinks, though it seems to me most lacked much inspiration. One of my benchmarks, the mint julep, is made with soda water and not the classic plain water – to me that creates the wrong consistency. Four draft beers and 11 bottled are also available, along with eight wines by bottle and glass.

I hadn’t had fried okra in years. It’s one of those dishes you either love or absolutely hate. Miss Delta’s are cut into rings, lightly breaded with a cornmeal crust, and flash-fried. They were non-greasy but didn’t have much taste otherwise – I wonder if it is frozen at this time of year. A sprinkling of salt and pepper helped, but we found ourselves adding ketchup for flavor, which kind of defeated the purpose. An appetizer was enough for three people.

Though the chef is from New Orleans, the food slants a bit towards South Carolina cooking, with some dishes having a bit of a vinegar bite to them; case in point, the greens. They come in either a vegetarian version or with bits of smoky pork. The greens are tangy but have a bit too much vinegar taste for my palate, though the version with pork mutes it a little. For those of us who grew up with greens cooked to soft perfection, these are a bit more fibrous and “al dente”, not as you get in most restaurants today. On the other hand, these could have come right out of Grandmother’s skillet, so they are true to an older standard. Along the same line, salads are basic and can be ordered as either appetizer or as one of the side dish choices with the dinners. The simple salad is just that – greens with a bit of diced green apple vinaigrette. Overall not bad, though a tad overdressed. Surprisingly, the Caesar salad was pretty darn good. As a side, it is quite large (I can’t imagine how big the full-sized portion is), the dressing is classic, loaded with flavor, and better than I expected.

Fried chicken is a dish that is difficult for many restaurants to do well. It either comes out dry as the desert, or mushy. It’s a deceptively simple dish, but can be complex to cook, as it needs to fry gently, but at the right temperature. The skin should be crispy and seasoned without being too breaded, salty, or cooked to oblivion. Pieces of chicken were larger than one usually sees in Southern restaurants; in the South, people prefer smaller and more numerous pieces…you get more crunchy skin that way. Still, it was prepared perfectly. Miss Delta’s version is one of the better in town, and easily one of the best bargains around. For $14, you get a choice of two side dishes, and a large portion of Draper chicken; a drumstick and two large breasts fried to a mahogany brown, with a crackling skin, and nice seasoning. Though a few spots were a little overcooked, this dish is a winner, and could easily serve two, as could most of the other dishes served here.

Though the gumbo had the brown-nut roux color of a Cajun gumbo, the dish was closer in consistency to a seafood stew. It was loaded with little pieces of chicken and a good amount of shrimp. It had quite a bit of heat, and the roux was complex and layered. The whole thing was served in traditional style, burying a small mound of rice. My only complaint was that some of the ingredients weren’t cooked evenly – some a bit mushy, but overall it was quite good.

The blackened catfish was terrific: very fresh, not “fishy,” not overly salty as much blackened food can be; perfect with the supplied lemon wedge. The accompanying remoulade was a home run. Thinner than most versions in New Orleans, it was served in a metal ramekin with some horseradish cream on top for an extra kick; an absolute winner.

They always have a meatloaf of the day. Once again the portion is large, especially with the accompanying sides. The night I tried it, blue cheese and bacon were mixed in, and slivers of apples were placed between the slices; really good.

With all plates, you can choose two out of seven sides (also available separately). Some were great, others just ok. The mac and cheese was just about perfect, but with no “crust” or burnt cheese topping; it was a satisfying accompaniment. The black-eyed peas and rice were tasty, though a bit under-seasoned (could’ve used some herbs and salt), but were greatly improved with a few splashes of red Tabasco. The red beans and rice were not as successful. I’m not sure what kind of beans they were using, but they weren’t like any red beans I’ve had before – more like pintos. The flavor was bland and the texture too mushy. I didn’t really care for the cornbread either; crumbly, neither salty nor sweet, it tasted rather bland and out of a box. You’ll find better elsewhere.

Desserts are about what you’d expect. Downhome cooking, nothing with great finesse, but generally fine. I have a weakness for sweet potato pie, and their version is large, moist, and has a flavor that would convert many sweet potato pie naysayers, though the crust is a bit thick.

Service is generally what you’d expect for this type of place; very friendly, low-key, and for the most part, prompt. Crowds seem to build quickly, so get there early on busy nights.

My emotional attachment to the food aside, I like Miss Delta. The prices are fair, the portions large. For a restaurant that has only been open four months, it has the comfortable feel of a spot that’s been around for a decade or more. I’ll be back.