KATU2 News has an exclusive interview with the developers working on the new downtown Ritz-Carlton Hotel in which planners say they may include food carts in the design. 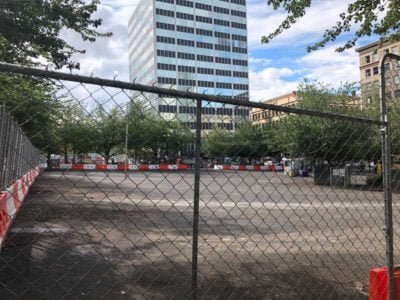 In the interview, the developers told KATU the current plan is to have an indoor/outdoor space on the ground floor for a “food hall”.

Bowen said the plan is to have the food hall on SW Ninth Street. He says the hall will have garage doors that will open up the space. He’s also hoping nearby O’Bryant Square becomes a part of the plan.

“Hopefully O’Bryant Park Square will be redone,” Bowen said. “I think that there’s going to be a lot of emphasis on redoing O’Bryant Park and bringing it back to what it used to be.”

As I was walking past the building yesterday it occurred to me that a renovated O’Bryant Square would be a good place to establish a new cart pod. Right now the park is fenced off and is in such bad shape it’s an embarrassment to the city. Between carts at the Ritz-Carlton and O’Bryant Square, the bulk of the carts could be brought back to the area. Of course the redevelopment will take time – targeted completion date is December 2022.

KATU has the full story on their website here.