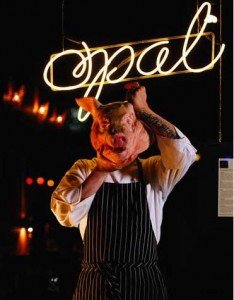 Eric Berchard, chef and owner of Thistle in McMinnville, is featured by the New York Times in an article called “The pride and prejudice of local“.

You may remember Eric from such events as The Showdown at the Cochon 555 Corral. I gave Eric a hard time, but he’s really not a bad guy; it’s just that passion and alcohol can lead to bad things – I do my best to blame everything on that combination.

From the Times: At his restaurant in the nearby wine country, he strives to serve beef and produce only from farms he has visited. The ling cod he caught when he took his 10-year-old daughter fishing off the Oregon coast? It made the menu. The rustic shelves in his kitchen were, naturally, reclaimed from a nearby barn.

Yet some say Mr. Bechard went too far the night he came to blows over a pig. “Somebody,” he said later, “needed to be held accountable.”

Mr. Bechard says his goal is to eventually run the restaurant solely with food from surrounding Yamhill County. Every local connection he makes and every local dollar he spends, he believes, strengthens his ties to the economic and political future of the place he lives. He says that kind of a commitment makes a place, any place, better.

…One of Thistle’s suppliers, Manuel Recio, a former advertising executive who decided to become a vegetable farmer several years ago, said Mr. Bechard should not have gotten into a fistfight. Yet, he also told of Portland chefs who blend imported strawberries into desserts whose ingredients are misleadingly labeled as locally grown. He said Mr. Bechard had a point.

“It was great to finally have someone call people out on it,” Mr. Recio said. The article covers Portland culture, Stumptown Coffee, and more on Mr. Bechard.

(Eric owes me for not running his mug shot)