Noble Rot has a somewhat confusing pedigree. As I understand, it was originally started by chef Leather Storrs, and received positive reviews, including from me. I liked the warm, comforting atmosphere and the limited but mostly well-executed menu. In 2007, Leather left and opened another restaurant on East Burnside called Rocket. This new restaurant was known for its interesting interior, terrific patio and a nice view of Portland, but the food received less than stellar reviews, and it closed in a little over a year.

Fast-forward to 2009. Rocket was still empty, and Noble Rot wanted a new location. The owners thought it could be a perfect match; Leather would go back to the kitchen, and Noble Rot would gain the prestige of the Rocket space. I went back three times to see how things differed from the original location.

The owners made a few updates to the Rocket exterior, all of them good. Signage is greatly improved, with the entrance clearly defined. Once you step off the elevator onto the fourth-floor hallway, you’ll find things pretty much unchanged. It opens into a pleasant waiting area that connects to the bar. You’ll either love or hate the interior. While it doesn’t have the clubby warmth of the old location, it has its own faux modern charm. The room is long and narrow, with a large bar running down one side. Tan booths with dark wood trim and windows run the length of the other, giving a nice view of the city. The ceiling is decorated with Jetsons-like large round orbits turned into pale colored sculptural elements. Sixtyish light fixtures hang here and there. The whole effect is coherent and adult, without being over the top or kitschy.

The music is kept at minimum volume, which is refreshing and rare in the more au courant dining rooms in town. Overall, the restaurant seats about 60, mostly in booths, plus the bar area. On the west side, doors open onto a patio, complete with heaters for chilly nights, and little spots for the tables, which seat about 30. The effect is open and airy, a hip place to see and be seen. The building is “LEED platinum”, which means that it uses 50% less energy than code requires. The staff is happy to point out that it has its own well for water, and raised garden beds on the roof that are used to grow some of the produce used in the kitchen.

While it’s easy to be seduced by the whole concept – the good-looking servers, the light, the view, the sophisticated interior, many things still need work to turn Noble Rot into a successful restaurant. At the old location it was first and foremost a wine bar, but now the focus has expanded to cover their full liquor license. The quality of the food seems to have taken a backseat to the liquor. Instead, the new location is all about imbibing. 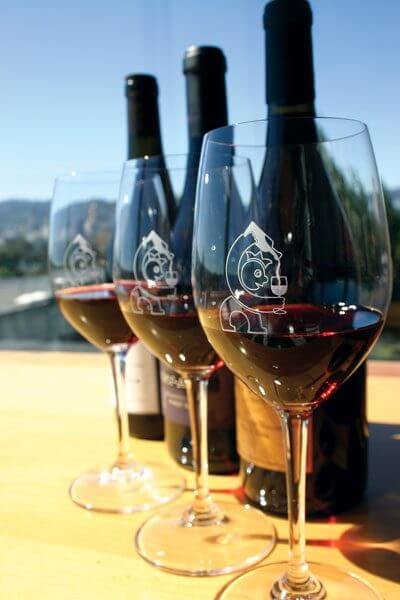 For the most part, service is excellent, though, on one occasion, we were charged higher prices for items on the specials chalkboard that were posted. Servers seem to have a good knowledge of the wine flights and are able to steer one in the right direction. Four flights are available, ranging in cost from twelve to eighteen dollars for three two-ounce pours. Recent selections included an Oregon Pinot Noir, Australian Reds, and Italian Whites. The list changes frequently and is a great way to get your feet wet with wines you may not have tried before. Though the price is considerably elevated from the prior location, the quality of the flights seems to be better. Overall, about 25 by-the-glass pours are available. The bottle list is well chosen, with lots of interesting options at a less than average restaurant markup.

Given the focus on alcohol, I was surprised to see beer is still a second thought, with Heater Allen Pilsner, Victory HopDevil IPA, or Ninkasi Oatmeal Stout available.

The food menu is also small. For starters there are marinated olives, roasted almonds, a cheese plate, and a small charcuterie plate, that gains nothing by being called the “Rot” charcuterie – how about the Noble Charcuterie?

On my first visit, they were running a special appetizer: pork meatballs with lemongrass and bok choy. It sounded good, but we didn’t get quite what we expected. The dish consisted of a large round plate, with a small soggy mound of bok choy sitting in a watery flavorless pool of sauce. Orbiting around the outside, were five olive-sized meatballs. Five. Olive-sized. One of our party noted that she preferred the Ikea frozen version. I found no hint of the advertised lemongrass.

A few salads are available. I had a forgettable Caesar which tasted like the lettuce had been left in the field too long – the bitterness overwhelmed the dressing. The Noble salad, composed of butter lettuce, red onion, sunflower seeds and blue cheese was just average, the huge lumps of blue cheese were nothing special, the dressing watery.

Another night, I decided to play things safe with a hamburger; something difficult to screw up. I was wrong. First of all, the meat patty was incredibly dry, as if a grill cook who didn’t know what they were doing had pressed all the juice out of it with a spatula. Unfortunately, it gets worse; the meat tasted like a handful of salt had been worked into it. I took two bites and put it down. A friend reached over and tried it, saying “It can’t possibly be that bad!” Her eyes widened. “It’s so dry I can hardly swallow it!” Accompanying French fries were of the frozen variety, tasteless no matter how much salt we added.

I’ve always liked the macaroni and cheese at the original location, so tried it here. A careful balance of the different cheeses is necessary to prevent one from overwhelming the others. This version had one rather pungent cheese that stomped on the others, making the dish one note. It just didn’t work.

Noble Rot serves three versions of panini, and, based on my recent experiences, are the best choice on the menu. I enjoyed one with ham & cheddar, the bread perfectly toasted, the cheese and ham working well with the sweet mango chutney. A grilled butternut squash version worked equally well, the earthy squash pairing well with sweet caramelized onions and goat cheese.

Crème brûlée was restaurant average, slightly overcooked, but nothing unusual; however, a cake with brown butter and mango stood out from everything else – and not in a good way. Picture a large plate, on one side is a small, round moist cake. Scattered across the rest of the plate are small pools of brown butter, dotted with mango puree. The thing about brown butter is, done right, it can be a wonderful thing, but there is a very fine line between browned and burned, and when it is burned, the result is truly terrible. Unfortunately, that is what we got. You could smell it was burned when they brought it to the table. While the cake itself was good, the acrid taste of the butter made it impossible to eat more than a few bites.

I am particularly disappointed in Noble Rot, because the other location was a favorite place for me to dine when I didn’t want to deal with a big production. The prices were reasonable, and the food was perfectly good. At the new location, the food seems to have been prepared by a first-quarter cooking student, who hasn’t mastered the basics, yet wants to throw a dinner to impress his friends. Maybe I’m the only one who feels this way; the restaurant gets quite crowded with happy beautiful people, but watching them slam down drinks, I wonder if they are paying any attention to the food at all.