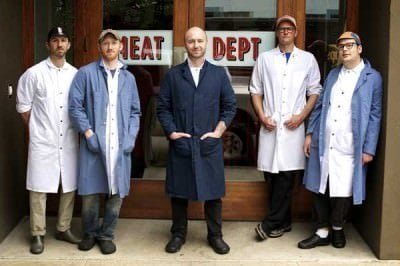 I’ve wondered about this in the past – Apparently the Olympic Committee has threatened to sue Olympic Provisions if they didn’t change their name.

The original name for the Portland, Oregon based company came from the Olympic Cereal Mills building, an iconic neighborhood landmark built in 1920, and the location of Olympia’s first restaurant and meat plant. The name change came about as a solution to a specific trademark law stipulation, which was brought to Olympia’s attention by the Olympic Committee last year. Changing one letter allows Olympia to continue creating uncompromising products while still referencing its beloved home region.

“It is important that our customers know that not one thing has changed in our recipes, process, or approach to what we do. Quality is our greatest goal every day. We built our business on this and we are unwavering,” said Elias Cairo, Co-Owner and Head Salumist, Olympia Provisions. “This small change in name is just a minor hurdle for our growing company, and we’re focused on making the best meat in the nation.”