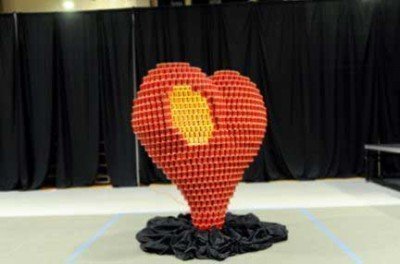 I thought this was pretty cool. The event benefits Oregon Food Bank. Here is the press release:

One of the most visually stunning demonstrations of talent and creativity within the architectural and engineering communities will provide a much‐needed source of food for Oregon Food Bank.

Celebrating two decades as one of the world’s most imaginative food charities, the Canstruction® exhibition and competition will invite Oregon’s top architecture, engineering, and construction firms to transform more than 100,000 cans of food into whimsical, wildly inventive sculptures at Pioneer Place in downtown Portland from April 22 to 28, 2013.

An annual art show, design competition, and food drive all rolled into one, Canstruction® raises hunger awareness by challenging teams of architects and engineers to create larger-than-life pop art masterpieces made entirely out of unopened cans of food.

Axium, a leading developer of enterprise and business intelligence software for architectural and engineering (A/E) firms, will be the presenting sponsor for the Portland event.  The Society for Design Administration and Oregon Building Officials Association are also contributing sponsors.

While admission is free, visitors to the exhibition are encouraged to bring high quality non-perishable foods such as tuna, beans and canned vegetables, which will be donated along with the cans used in the competition to the Oregon Food Bank.

Portland is one of more than 150 cities around the world taking part in the international competition, which has donated more than 20 million pounds of food to local hunger programs since its founding in 1992.

The goal of the Portland event is to collect enough cans of food to donate the equivalent of 270,000 meals; one month of food for those seeking assistance from Oregon Food Bank.

After the teams construct these elaborate structures, each structure will be judged by the Portland Canstruction® jury and awards will be given for Most Meals, People’s Choice, Best Meal, Structural Ingenuity, Best Use of Labels, Juror’s Favorite and Honorable Mention.

Last year’s event resulted in a donation of approximately 36,600 pounds of food and $31,390 to Oregon Food Bank. Since its inception in 1997, the Portland event has raised approximately 444,600 pounds of food and donated $147,490 to help fight hunger in Oregon and Southwest Washington. Nationally organized, Canstruction® is a 501(c) (3) charity committed to ending hunger. In 2013, Portland joins over 200 cities around the world participating in Canstruction®.