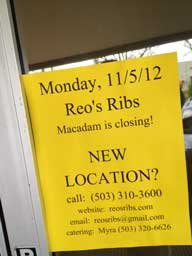 The neighbors off of SW Macadam can breathe better without all the wood smoke from the smokers at Reo’s Ribs. There were complaints when he first opened. In fact his smoke caused visibility problems with traffic a couple of times until he put in a really tall smokestack. Now all of this is moot, as the restaurant is closed. A sign on the door mentions a new location, but doesn’t say where it will be.

I don’t normally post PR from Broussard, but this one is worth noting. Chef Vitaly Paley (Paley’s Place, Imperial) is continuing his expansion with the opening of Portland Penny Diner. The restaurant, located in the Hotel Lucia on 410 SW Broadway will open November 30th.

The Penny Diner is counter service and to go. The bar caught my eye –

The bar at Portland Penny Diner, helmed by Bar Manager Brandon Wise, will be equally extensive. Wise has delved into the history of the soda fountain and resurrected many of the pharmacological and syrup-based drinks traditionally served in a diner setting, along with a full service cocktail bar. Phosphate sodas, lactarts and other drinks originally popular around the turn of the century, will be revived and updated for visiting and local imbibers alike. The diner will also be a top late night hangout spot in Downtown Portland with late night weekend hours and bartenders pouring classic and draft cocktails, cheap beer and Fernet Branca on tap.

You can read more including details on the food here.

PDX.Eater is saying that the space once held by the upscale but ill-fated Lucier is about to be leased by the same people involved with Portland Prime steakhouse, part of the Keeler Hospitality Group portfolio. With a 4 million dollars build out, Lucier, opened in 2008, was the most ambitious restaurant project ever launched in Portland, but it failed, closing in 7 months. Some say it was too haute for Portland, I say the food was just fine, but not worth the prices… and that bartender in the sphere – don’t get me started. Keep in mind that rumors of imminent re-openings have been flying for years, but none have come to fruition.

After all the fuss about the Guy Fieri restaurant garnering terrible reviews, the Romenesko blog surveyed other critics around the country, asking about their worst reviews and the fallout from them. The Portland Oregonian’s own Michael Russell weighed in about his Boxer Sushi piece. The whole article is interesting reading.

Bruce Baeur of Vino was featured on an episode of Cooking Up a Story about “good value wines”. It’s a nice video, which you can view here (and he demonstrates the proper way to open Champagne).