The popular upscale restaurant Red Medicine in Beverly Hills, has come up with a new way to deal with reservation no-shows: publicly embarrass the offenders on the restaurant’s heavily used Twitter account. The restaurant, which was just named number 48 of the “Top 100 U.S. Restaurants” by Opinionated About Dining, lost a “bunch of prime tables” during last Saturday night’s service. Red Medicine doesn’t require a credit card for a reservation, and doesn’t overbook time slots, so just a few empty tables can seriously effect the restaurant’s bottom line. 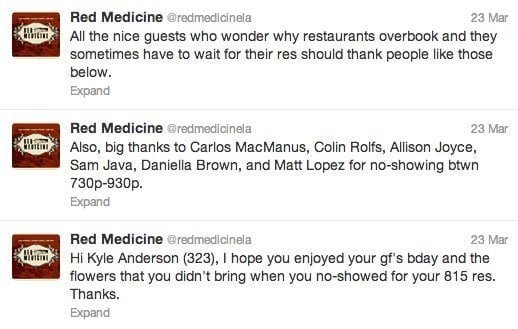 “Invariably, the assholes who decide to no-show, or cancel 20 minutes before their reservation (because one of their friends made a reservation somewhere else) ruin restaurants (as a whole) for the people who make a reservation and do their best to honor it,” Ellis wrote to Eater LA.