When I was growing up, on hot summer days dad used to get everyone into the car and head out to Lancaster California to pick fat juicy cherries and sweet peaches from the old orchards. We’d make a day of it, hiking in “The Devil’s Punchbowl”, stopping for a burger at A&W Rootbeer, and driving home tired and happy, the smell of ripe fruit playing harmony with the music on the car radio. I remember one year Dad had to swerve when a car pulled in front of us and the trays of overripe strawberries flew through the air. When he eased to the shoulder of the road and yanked open the door on the old VW bus, it looked like someone had been horribly disemboweled on the back seat.

The next day we’d run out to the back porch, and he’d pull out the old hand-cranked wooden ice cream freezer, packing it with ice and rock salt shaken out of big paper sacks. All of us would take our turn, arms aching, trying to keep the cold metal cylinder spinning as the ingredients inside transformed into the magic of creamy, velvety ice cream. Gathering around as he removed the dasher, the cold cream would drip off and we’d all try to catch it with paper cups. While it set up in the freezer, Dad started the barbecue, and he and I would grind meat for hamburgers, carefully shaping them with a gentle touch. After they were eaten and fingers were slick from buttery corn, cold bowls would be passed around the back porch, and there would be silence broken only by the slow scraping of spoons.

Dad was ahead of his time. All these years later I remember him making multiple batches, trying to get the flavors balanced just right. When the strawberries were especially good, he’d make freezer sorbet with cracked black pepper and a dash of vinegar.

Sitting with him in the kitchen while he made the batter, tasting, adjusting, and then seeing how the flavors changed again as it was frozen, I learned how difficult it is to adjust the recipe, especially as the intensity varied from year to year. He’d let me experiment with little batches, and I’d do my best to come up with new ideas. I wasn’t up to the task, as I always wanted to use my favorite foods; abalone, lobster and clam ice creams just don’t work.

Memories of those warm Sundays have drifted through my dreams ever since Salt & Straw Ice Cream opened on Alberta Street last year. Now with a second place on NW 23rd, lines are queuing for good reason.

What sets Salt & Straw apart? It’s not only a step into the past when batters had a higher percentage of milk-fat, but even more importantly, the balance achieved within the panoply of ingredients. Take a look at the current list of flavors:

That’s just the regular flavors. Here are the seasonal:

There is a lot that can go wrong with these combinations. I was a bit nervous about the pear and blue cheese, but once I tried it… crumbles of Rogue’s Crater Lake Blue and Truitt Brother’s pears… need I say more? Now I just throw caution to the wind and order a random flavor. Sweet heat Burnside Brewing Apricot Wheat Ale with candied Scotch bonnet peppers is a hot August afternoon on a cone. The classic combination of strawberries from Oregon Hill farms, honey balsamic from Honey Ridge Farms, and black pepper from Pohnpei made me flash back to a gelato I had in Rome. Cinnamon Snicker Doodle is made with Red Ape cinnamon from a spice company in Eugene which donates part of the proceeds to save the orangutans in Sumatra where the cinnamon is harvested – no guilt – I do it for the orangutans. 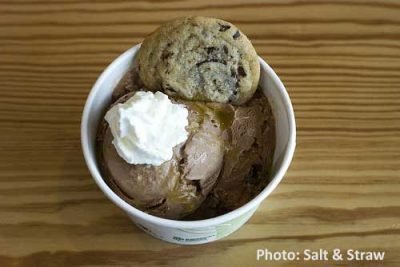 I could spend a lot more words discussing each flavor, but there isn’t much point, as these things are highly subjective. Just keep a few things in mind. The ice creams here aren’t the sugar bombs you may be used to; you’ll probably find this a good thing. If you try one and you don’t like it, don’t write off Salt & Straw. Try something else. Their most popular flavors are the Blue Cheese & Pear and the Salted Caramel. I thought I’d love the latter, but I didn’t, however the first made my toes curl in a good way. O Magazine raved about the Arbequina Olive Oil combination. While I appreciated the subtle grassy peppery flavor, a friend just thought it was greasy. Also, think about how different scoops will combine. Remember, this is high fat stuff, so it tends to be soft and flow together. There are times when the chef goes awry, and it isn’t very good – recent example, Loaded Baked Potato.

The staff is very patient, but do the people in front of me really need to try six flavors when the line behind them (usually) winds around the corner? I think not. These days staff members work their way down the line, giving samples so people know what they want before they get to the counter.

Salt & Straw makes their own cones, and has floats, shakes, sundaes and a full line of breakfast pastries, cookies and desserts which are baked in-house. I have not tried them, as everyone knows that type of thing is fattening.