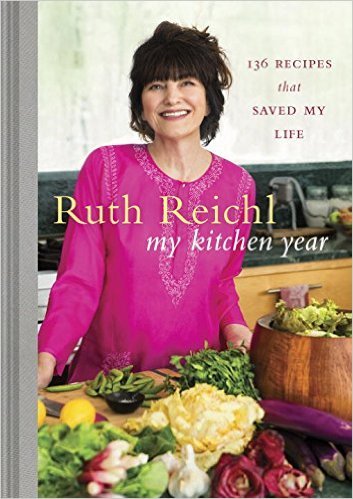 Powell’s Books sends out an email every month with a roundup of all the food related authors coming to town. This month Ruth Reichl is going to be talking about her new book, “My Kitchen Year: 136 Recipes that Saved My Life”. If you haven’t seen Ruth in person, she’s always entertaining, and her books tend to be great. She’ll be at Powell’s Beaverton on Saturday October 10th, at 1pm.

While I’m at it, here is the press release with all of the upcoming speakers:

Ruth Reichl “My Kitchen Year : 136 Recipes That Saved My Life”

This splendid book collects over 100 recipes of the comfort food Ruth Reichl shared with family and friends throughout the year after Gourmet magazine was, shockingly, shut down.

Over the past 40 years, Ruth Reichl has worked in restaurants, written about food, been a restaurant critic and the food editor of a major newspaper. She’s spent time in kitchens all over the world. She’s watched food become an important part of popular culture. “But,” as she writes in her introduction, “…two things haven’t changed. My knife skills are still pathetic. And I still believe, to the core of my being, that when you pay attention cooking becomes a kind of meditation.” When Gourmet magazine shut down and suddenly one of the most visible and beloved figures in the world of food found herself without a job. Stunned, sad, fragile, she retreated to her country house with her husband and, during her recovery year, sought to recover the simple pleasures of the kitchen. From such basics as a steak sandwich (must use skirt steak), braised pork shoulder (cider), spicey Tuscan kale (anchovies, breadcrumbs) to crisp lemony Yukon potatoes, cherry crostata (sour cherries!) and peach cobbler (buttermilk crust) Reichl fans will revel in Reichl’s culinary—and life—lessons relearned in the kitchen.

Ruth Reichl was born and raised in Greenwich Village. She wrote her first cookbook at 21, and went on to be the restaurant critic of both the Los Angeles Times and the New York Times. She was Editor-in-Chief of Gourmet magazine for ten years.

A hip, new guide to wine for the new generation of wine drinkers, from the sommelier creators of the award-wining site WineFolly.com

Red or white? Cabernet or merlot? Light or bold? What to pair with food? Drinking great wine isn’t hard, but finding great wine does require a deeper understanding of the fundamentals. Wine Folly will help you make sense of it all in a unique infographic wine book. Put together by the creators of Wine Folly, a certified sommelier and a designer who have become renowned in the wine world for simplifying complex wine topics, this book combines sleek, modern information design with data visualization. Get pragmatic answers to your wine questions and learn pro tips on tasting, how to spot great quality, and how to find wines you’ll love. Wine Folly includes:

A guide to pairing food and wine, with a wine-region section with detailed maps.

Practical tips and tricks for serving wine, plus methods for tasting wine and identifying flavors.

Wine Folly will empower your decision-making with practical knowledge and give you confidence at the table.

Madeline Puckette is a certified sommelier with the Court of Master Sommeliers and has worked in several restaurants as a sommelier or a server before creating Wine Folly. Her design work with Wine Folly has been contracted by Wines of France, Wines of Bordeaux, Wines of Beaujolais, the Court of Master Sommeliers, the Guild of Sommeliers, the Washington State Wine Commission, and Rhône Valley Wines. In 2013, Wine Folly was named Wine Blogger of the Year for the 20132014 year by International Wine & Spirits Competition.

Besides drinking wine, writing, and designing for the blog, Madeline loves working on cars, cycling, running, and open-water swimming. Before becoming a sommelier, Madeline was a music producer and singer.

Want to create an organized, productive, and beautiful kitchen and home? Popular Seattle blogger, Erica Strauss (Northwest Edible Life) shows us how in this modern homekeeping handbook for thrifty DIYers who care about sustainability. A fresh take on modern homemaking, this is a practical (and sometimes sassy) guide to maximizing your time, effort, and energy in the kitchen and beyond. With a focus on less consumerism, it will teach you how to organize your kitchen and home to make the best use of your time. For those yearning to live a more ecologically minded, grounded lifestyle, this book is full of practical, no-nonsense advice, fabulous recipes, and time- and money-saving techniques.

Erica Strauss is the founder of Northwest Edible Life, one of the most popular and well-respected urban-homesteading and gardening blogs in the country. A professionally trained chef, she shares her fun and punchy perspective on garden-to-table eating and living a slower life though her writings. Erica was featured in Best Food Writing 2013 and regularly writes for national cooking and gardening magazines.

Ever since he opened Zahav in 2008, chef Michael Solomonov has been turning heads with his original interpretations of modern Israeli cuisine, attracting notice from the New York Times, Bon Appétit, (“an utter and total revelation”), and Eater (“Zahav defines Israeli cooking in America”).

Zahav showcases the melting-pot cooking of Israel, especially the influences of the Middle East, North Africa, the Mediterranean, and Eastern Europe. Solomonov’s food includes little dishes called mezze, such as the restaurant’s insanely popular fried cauliflower; a hummus so ethereal that it put Zahav on the culinary map; and a pink lentil soup with lamb meatballs that one critic called “Jerusalem in a bowl.” It also includes a majestic dome of Persian wedding rice and a whole roasted lamb shoulder with pomegranate and chickpeas that’s a celebration in itself. All Solomonov’s dishes are brilliantly adapted to local and seasonal ingredients.

Zahav tells an authoritative and personal story of how Solomonov embraced the food of his birthplace. With its blend of technique and passion, this book shows readers how to make his food their own.